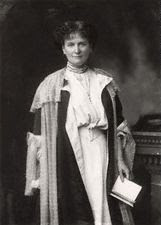 Dear Flora: You carved a career in journalism at a time when few women ventured into the world let alone shaped public policy. A woman determined to succeed despite all odds you were in the right place at the right time in England and began your career in journalism in 1886. Flora was sent by the Manchester Guardian newspaper as the only woman reporter to cover the Anti-Slavery Conference in Brussels. Her influential journalism furthered a brilliant career. In 1892, The Times sent her to Southern Africa and thus began an incredible journey. The positive benefits of the British Empire infused in her writings led the way in publicizing favorable attitudes about British imperialism. Flora Shaw became one of the greatest journalists of her time, specializing in politics and economics, but she is also known for naming Nigeria.
A FREE WOMAN
As a free woman, unencumbered by husband or family, Flora decided to use her writing ability to shape political policy. For fifteen years she worked as a highly regarded political journalist and foreign correspondent for the Pall Mall Gazette and The Manchester Guardian. She started to write for the London Times under the name F. Shaw trying to disguise the fact that she was a woman. Later she was so highly regarded that she wrote openly as Flora Shaw. She penned more than 500 articles on economic and political issues in British colonies that supported British expansion, by military force if necessary. Shaw was not timid about her point of view. She did not merely report what leading statesmen had to say about imperialism, she shaped the ways that politicians used language to garner support for the imperialist cause. Had she been a man, she was told by the Times, she would have been made their colonial editor.
NAMING NIGERIA
In an essay, which first appeared in The Times on January 8, 1897, Flora Shaw, the advocate for imperialism, suggested the name “Nigeria” for the British Protectorate on the Niger River. She thought that the official title, “Royal Niger Company Territories” was too long and coined “Nigeria” in preference to such terms as “Central Sudan” that was associated with the area. Her argument pushed the name chance through saying, “The name Nigeria applying to no other part of Africa may without offense to any neighbors be accepted as coextensive with the territories over which the Royal Niger Company has extended British influence, and may serve to differentiate them equally from the colonies of Laos and the Niger Protectorate on the coast and from the French territories of the Upper Niger.”
THE SEEDS OF IMPERIALISM
Imperialism played a role in the Shaw’s family, even before Flora was born in 1852, in Woolwich, England. Her mother’s father was the governor of Mauritius, A French Colonial Island in the Indian Ocean. The daughter of an English father, Captain George Shaw and a French mother, Marie Desfontaines, Flora’s talent for writing emerged early. When she was 17 she met writer John Ruskin who adopted Shaw as a protégée and with his guidance, she published her first children’s story, Castle Blair which was based on her own Anglo-Irish childhood experiences. Between 1876 and 1886 she wrote four other novels as well as a history of Australia for children. Ruskin also introduced her to historian Thomas Carlyle who introduced her to the ideals that would shape her life and career.
A SOLITARY LIFE
Flora became an extremely successful career woman. Like modern women today, she did not marry until she had established a name for herself, thus freeing herself from the restraints of marital duty that were obligatory for white, middle-class, 19th century women. Although Flora had a determined sense of individualism and independence she apparently did not extend that philosophy to other women. Case in point, sadly she did not believe that other women ought to act independently of their fathers and husbands as she did and refused to support woman suffrage, or the right of women to vote.
DAME OF THE BRITISH EMPIRE
When Flora was 50 years old she married Sir Frederick Lugard, a high commissioner of Northern Nigeria, a British colony in West Africa. As a governor’s wife she continued to support the imperialism cause by promoting her husband’s career and working with philanthropic organizations, such as the Royal Society of Art. Flora Shaw Lugard’s work with refugees during World War I earned her the title Dame of the British Empire.
Dame Flora Louisa Shaw, Lady Lugard: Despite her fame, Flora remained modest saying, “To have helped to rouse the British public to a sense of Imperial responsibility and an ideal of Imperial greatness…to have prevented the Dutch from taking South Africa, to have directed the flow of capital and immigration to Canada…are all matters that I am proud and glad to have had my part in.”
Posted by Polly Guerin at 3:22 PM

Labels: British Journalist, Crusader for the British Empire and Imperialism