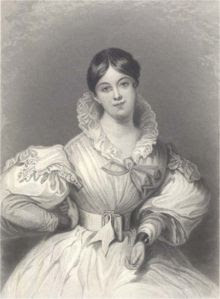 Although Letitia Elizabeth Landon, is relatively unknown today, the work of this beautiful, young English poetess and novelist of the late Georgian and early Victorian period is resurfacing with fascinated interest and feminist criticism has given critical interpretation of her work another perspective. She was born (1802-1838) into the lower middle class, only to become in her teenage years, a published poet, and eventually the most successful poet of her day. Her verse reveals a highly intelligent and emotional intensity. She wrote of passionate love at a time when women were conventionally restricted in their themes making her the favorite among the literary intelligentsia, known to her devoted readers as simply L.E.L. Her success as a young single woman carving out an independent career in the tough arena of literary London in the 1830’s recognizes her as a gentle woman determined to succeed beyond her dreams. Landon’s body of work is an impressive achievement but her mysteriously scandalous life and early death is once again being scrutinized. . THE SCANDAL OF LITERARY ENGLAND Landon’s writing observed today exerts a powerful fascination in the vividness and musicality of her distinctive voice. Her typical themes are about “Sorrow, Beauty, Love and Death.” The influential London periodical, the Literary Gazette began publishing her poetry at the age of seventeen. It is rumored that she had a long-term illicit affair with an older, married neighbor who is also the editor who published her first poem. The gossip mongers and letters circulated among London's social set about Landon and her lifestyle. When she escapes to the countryside every few years the rumors circulate: “Is it to bear his illegitimate children?” Rising above the tide of criticism she wrote movingly of romance and continued to partake in her high-spirited social life. LANDON’S PROLIFIC OEUVRE Landon’s voluminous publications are now again in print and renewed recognition of Landon’s impressive achievement may be due in part to the largess of the exhibit, "The World of Letitia Elizabeth Landon: A Literary Celebrity of the 1830s," which showcased at the Grolier Club in New York in 2011 with manuscripts, first editions, prints, photos and other materials, which illuminated the life and art of this outstanding British writer. Today Landon is attracting attention for her unbridled success as a poet and novelist. Her oeuvre was prolific. THE POETESS and NOVELIST In the eight years that followed the publication of Landon's first volume of verse in 1821, it and the eight collections that followed were extremely popular. Landon wrote reviews, articles, and stories for many London journals. In 1824 her volume of romantic narrative poems, "The Improvisatrice," became a major best seller. In 1831 Landon published her three-decker novel, "Romance and Reality," followed by successful historical novels, Francesca Carrara (1834), and Ethel Churchill (1837). Landon’s celebrity was widespread and her writings were translated into French, German, and Dutch, and distributed widely from Paris to St. Petersburg. She was no shrinking violet. Famous writers who counted among her admirers included Hawthorne, Whittier, Poe and many other prominent American authors. MARRIAGE AND MYSTERIOUS DEATH The subject of Landon’s romances is both mysterious and questionable. After the scandal of her teenage romance with a married man, her first editor, she later was engaged to one man or another, only to have those engagements broken by rumors. Why Landon finally chose to marry a man who would take her to far off Africa is yet another mystery. In 1838 Landon married George Maclean, a colonial official, possibly an abusive man, who sweeps her away to Cape Coast, West Africa (in present-day Ghana), where the lonely, often ailing, poetess is found with a vial of prussic acid in her hand, slumped against her bedroom door. Mysteriously dead at the age of 36, the question still remains. Is it by her own hand? Did she administer the elixir as a medicine, was it an accident? suicide? or was it murder? The answer is still pondered, but conjecture suggests that Landon was taking the prussic acid to soothe a stomach ailment.
Letitia Elizabeth Landon wrote movingly and delicately of ‘romance.’ Her vast body of work: poetry, her novels and her life are, once again, being scrutinized. Landon had much to say about life and love. In one of her famous quotes she says it all, “Delicious tears! The heart’s own dew.”
Posted by Polly Guerin at 5:08 AM 6 comments: 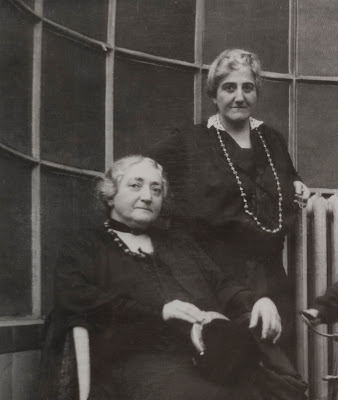 Henri Matisse fondly called them “My two Baltimore ladies,” and for good reason as the patronage of Matisse by the Cone sisters was a paramount reason for his celebrity. As daughters of prosperous German-Jewish immigrants, the Cone sisters, Claribel and Etta, were supported in their connoisseur art quest by their family’s successful textile business, Cone Mills Corporation, a firm that became widely recognized for producing the fabrics for the fashion industry. The Cone sisters were well-educated and widely traveled independent modern women who were determined to succeed. They found in modern art an emblem of their own independence. Together the sisters amassed one of the finest collections of modern French art in the United States, discovering as they did Pablo Picasso an unknown at the time. Claribel and Etta had the foresight and generosity to envision their extraordinary array of art worlds in a public institution and bequeathed their collection of legendary masterpieces to the Baltimore Museum of Art.
THE GERTRUDE STEIN CONNECTION
With the financial means and important social connections the two wealthy, cultured Cone sisters became world travelers and art collectors. Always, impeccably dressed in ruffled collars and layered petticoats, they immersed themselves in the swirl of Parisian bohemian life and became enmeshed in the excitement of new art and ideas and fell in love with modern art. In Paris, Claribel and Etta spent time with the doyenne of the Parisian avant-garde, Gertrude Stein, and her brother Leo, who influenced their collection. In 1905, Etta went with Gertrude, another Baltimorean, by adoption, to the run-down studio of a young, unknown artist named Pablo Picasso and, on impulse, bought an etching. It was the first purchase of what turned out to be a vast, decades-long art shopping spree. By the time Etta bought her last Picasso 44 years later, she and her older sister, Claribel, had filled their Baltimore apartment with some 3,000 art objects, textiles and decorative arts, which they had acquired from their travels across Europe and expeditions to Africa and Asia. The Steins also introduced them to Henri Matisse at the Salon d’Automne. Tough decried by the critiques for his bright, vividly hued paintings, Etta was intrigued by Matisse’s work and made her first of many visits to the artist’s studio. Etta was close to the entire Matisse family and maintained an ongoing correspondence with the painter as well as his daughter Marguerite and his son Pierre, an art dealer in New York. Ever a devoted patron, she wrote to him, “Of course, I want to do everything I can to add to your father’s fame.” Throughout the years, however, the sisters became friends of both artists.
LEGENDARY MASTERPIECES
Claribel and Etta seem to have had an insatiable desire for shopping, browsing in Parisian lace and button shops, and going to opera, socializing with friends, and buying art at an astonishing rate. And they kept separate records. Legendary masterpieces included Matisse’s “Blue Nude” (1907), Gauguin’s “Woman with a Mango (1892) and Cezanne’s “Mount Sainte-Victoire Seen from the Bemus Quarry (circa 1897). Claribel acquired paintings by Pissarro, Sisley and Van Gogh; Etta purchased works by Degas, Rodin, both bought Cezanne, Renoir, and more than twenty works by Matisse. Most of the art collected are images of women including Matisse’s 1929 The Yellow Dress, which shows a woman centered in her own world, very much like the Cone sisters’ independent penchant. In his 1937 Purple Robe and Anemones, a woman in a purple dress sits in a room in a classic Matisse interior filled with patterned rugs, screens, flowery drapes and vases of flowers. The Cone sisters collected art because they loved it and lived in two adjoining apartments in Baltimore.
THE BALTIMORE LADIES
Claribel Cone (1864-1929) and Etta Cone (1870-1949) grew up in a large, close-knit German Jewish family of twelve children. Their father, Herman Cone (Kahn before he immigrated to America) owned a wholesale grocery business which afforded the family with a comfortable lifestyle. However, it was the investment of Herman’s two eldest sons, Moses and Ceasar, in the textile business, The Cone Mills Corporation that made the family wealthy. The brother’s support of their two unmarried sisters enabled Claribel and Etta to devote their lives to collecting masterpieces of modern art. Claribel pursued a medical degree, an unusual path in the late nineteenth century America. Etta was content to stay in her elder sister’s shadow, becoming the family caretaker and spending her time studying music, French and art. There were no early signs that the Cones would develop a taste for modern art but there interests in collection art, textiles and objects were eclectic.
Claribel and Etta Cone were wealthy socialites but they had Yankee spirit and were blessed with excess capital and the leisure pursuit to collect the finest collections of Modern Art in the United States. Considering their accomplishment, the amassing of the Cone Collection, is reason enough to admire two women determined to succeed, who sharpened and refined their collective eye and put Baltimore on the map.
Posted by Polly Guerin at 7:56 AM 7 comments: