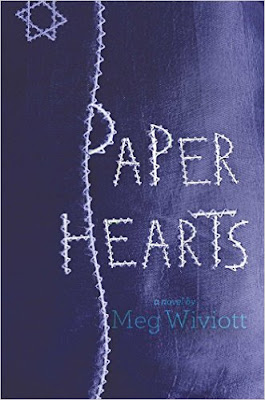 Meg Wiviott's young adult book PAPER HEARTS brings the story of Fania and Zlatka and their friendship through poetry written during the terrible days in Auschwitz The novel is is based on a true story of a bond that helped two teenage girls realize hope for the best in the face of the worst. The book of collected poems also focuses on twenty remarkable young women who conspired through their youth and determination to conspire against the Nazi regime, which classified them as subhuman, forced them to work as slave laborers, and thought of them as nothing more than the numbers tattooed on their arms---yet they conspired to commit an act of great defiance.
They dared to behave as humans and they dared to celebrate life---a birthday---with a simple gesture that, if they have been caught, could have meant death. Needless to say, after some seventy years after the events, this story still resonates to remind us that courage and youthful optimism instilled a strong resolve in the hearts of these incarcerated young women.Through poetry in verse their plight in the hateful camp becomes a riveting story of fortitude and survival.
MAKING A BIRTHDAY CARD should seem like a simple everyday task but only "an act of defiance," a statement of hope makes this book such a treasure to read, to inspire, and to remind us of indomitable spirit of the youthful poets. Making a birthday card in Auschwitz was all of those things but death marches were real and the slightest effort of defiance was punishable by death.  Yet Zlatka had courage and the determination to create a birthday card for her best friend Fania. She stole and bartered for paper and scissors, and secretly created an origami heart. It was passed along the work tables to sign, which they did with their hopes to find love and happiness but most of all, freedom. It is not known how many of the girls who signed the Heart survived the death marches but  Fania  treasured her gift and kept it secret during her imprisonment, even carried it through the death marches. She kept the Heart with her when she was liberated, and through the years as she rebuilt her life and her family.

This remarkable story lives on in the Montreal Holocaust Memorial Centre, where it is a permanent exhibition, telling its story of defiance, love, and friendship. Thousands of visitors who visit the Centre each year, will no doubt take to their own hearts this remarkable story in verse. Fania eventually returned to Poland, met her husband, and then settled later in Toronto, Canada, where they raised their daughter and son. Fania still lives there today.As for Zlatka, the creator of the Heart, she too returned to Poland, fell in love, got married and moved to Buenos Aires, Argentina, where she still loves today (as of October 2013).
This is Meg Wiviott's first novel for young adults. Published by Margaret K. McElderry Books, an imprint of Simon & Schuster Children's Publishing, 1230 Avenue of the Americas, New York, NY 10020. On sale: 9/1/15

Preorder the book: http://books.simonandschuster.com/Paper-Hearts/Meg-Wiviott/9781481439831
Fan mail and comments about this review welcome at
pollytalknyc@gmail.com.,