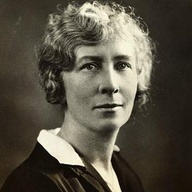 One would hardly have expected Lillian Evelyn Moller Gilbreth (1878-1972), an American psychologist and industrial engineer to be one of the first superwomen who combined career and home life. Despite the fact that her father was not an advocate of higher education for women, she was determined to succeed and managed to graduate from the University of California in 1900 and pursued her master’s degree at Columbia University, but illness forced a return to California; she went back to Berkeley and received a master’s degree in literature in 1902. She seemingly ‘had it all’ and was one of the first females working in the fields of engineering and industrial psychology. Lillian considered herself plain and never expected to get married but is perhaps best remembered as the mother of twelve children. The books Cheaper by the Dozen and Belles on Their Toes (written by their children Ernestine and Frank Jr.) were subsequently made into movies. Lillian Moller Gilbreth was a remarkable woman for her time and her work paved the way for other women to pursue similar industrial engineering careers.
A SUMMER ROMANCE After graduating she celebrated by taking a trip to Europe and on a stopover in Boston the group’s chaperon Minnie Bunker introduced Lillian to her cousin Frank Bunker Gilbreth, a well-off construction company owner. It must have been love at first sight because they had an instant connection and upon her return from Europe Frank travelled to California to meet her family. They became engaged and married in 1904. Frank, who never went to college, was interested in efficiency in the workplace and together they began their study of scientific management principles and Lillian worked by his side in his consulting business. They began their family and moved to Rhode Island in 1910, where Lillian took her doctorate in psychology at Brown University in 1915 with four young children in tow at the ceremony.
TRUE PARTNERS Lillian and Frank were true partners at home and in business and applied their scientific management principles to the running of their household and the businesses to whom they consulted. Where Frank was concerned with the technical aspects of worker efficiency, Lillian was concerned with the human aspects of time management. Her work with Frank helped create job standardization, incentive wage-plans, and job simplification, and she was the first to recognize the effects of fatigue and stress on time management. Over seventeen years, the couple had twelve children all the while collaborating together. The story of their family life with their dozen children, in the fore-mentioned books, chronicles how they applied their interest in time and motion study to the organization and daily activities of such a large family.
LILLIAN’s RECOGNITION Lillian and Frank wrote several books together, but Lillian was never recognized as co-author because the publishers were concerned about the credibility of the books if it were known that a woman was one of its authors. Yet Lillian had a doctorate and Frank had not even attended a university, but Lillian was already gaining recognition as a pioneer of what is now known as organizational psychology. When Frank died of a heart attack in 1924, Lillian was faced was the enormous task of raising the children alone and finding a way to continue their consulting business. She returned to holding workshops in their home. She became the first woman member of the American Society of Mechanical Engineers and in 1935 she went to Purdue as a professor of management and the first professor in the engineering school. In her consulting business, she worked with GE and other firms to improve design of kitchens and household appliances. During the Great Depression she was asked by President Hoover to address unemployment and launched the successful “Share the Work” program.
THE RECIPIENT OF MORE THAN A DOZEN HONORARY DEGREES, LILLIAN MOLLER GILBRETH’S ABILITY TO COMBINE A CAREER AND FAMILY LED TO HER BEING CALLED, BY THE CALIFORNIA MONTHLY IN1944, “A Genius in the Art of Living.”

Posted by Polly Guerin at 9:02 AM No comments: