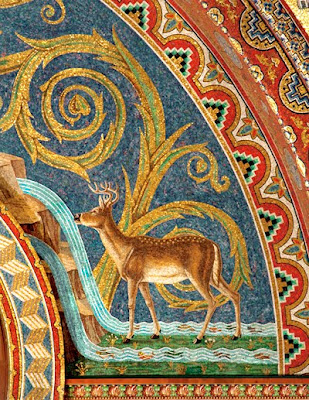 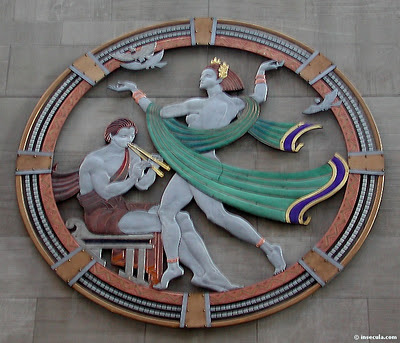 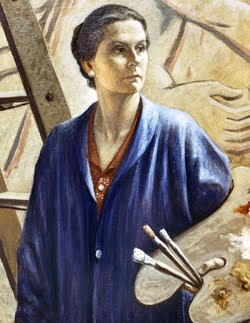 If walls could talk what would they say? They would praise the artisitic oeuvre of Hildreth Meiere, who installed a prolific outpouring of works at a hundred public and religious buildings, like Temple Emanu-El, St. Patrick’s Cathedral and St. Bartholomew’s in New York City, and the National Academy of Sciences in Washington, D. C. and the Nebraska State Capitol. Her most famous designs are the Art Deco roundels, the plaques Dance, Drama and Song that appear on the 50th Street facade of Radio City Music Hall in Manhattan. For this Art Deco muralist, mosaicist, painter and decorative artist the domes, ceilings, walls, windows and floors of monumental buildings were her canvas. She completed more than 100 commissions which ranged from corporate art to liturgical works. SUCCEEDING AS AN EQUAL In the 1930s Meiere was considered the most famous muralist of the Art Deco style, and probably, the most prolific, in the country. She was a woman determined to succeed and beat the odds against professional success for her sex. She wrote to a friend in 1936, “I’ve worked as an equal with men, and my rating as an equal is all that I value.” Hildreth Meiere (1892-1961) was a woman artist who was able to gain the respect of the greatest muralists and architects of her day. Her finest achievements and artistic installations serve as an inspiration for all women in the fields of creative endeavor. MEIERE’S EDUCATION Achieving recognition as an artist takes many avenues of education and exploration, but foremost is the innate talent that Hildreth possessed. Educated at the Art Students’ League in New York, her hometown, the California School of Fine arts, the School of the Art Institute in Chicago, she sought after the best teachers and studied in Florence, Italy. There she was overcome by the glories of the Renaissance and all that preceded it, and she fell in love with mural painting and the magnificent walls. MEIERE’S OEUVRE It wasn’t long before Meiere’s talent would attract architects. In 1923, architect, Bertram Grosvenor Goodhue hired Meiere to decorate the dome of the National Academy of Sciences in Washington, D. C. and her career took off exponentially. She worked on two additional projects for Goodhue, most notably the Nebraska State Capitol’s eight distinctive works, which collectively became her piece de resistance. Meiere collaborated with other architects and craftsmen who executed her creations which reached beyond painted wall murals to include glass and marble mosaics, marble floors, glazed terra-cotta tiles, stained glass and wool tapestries. Her range was astonishing and identified with rich decorative quality.
HILDRETH MEIERE’S BEAUTIFUL ART OF MOSAIC CONTINUES TO BE ENJOYED IN CHURCHES AND PUBLIC BUILDING ACROSS THE COUNTRY. HER RANGE WAS ASTONISHING YET SHE FOUND TIME TO PAINT THE PORTABLE WOODEN ALTAR PIECES PRO BONO FOR MILITARY CHAPLAINS DURING WORLD WAR II. SHE SERVED ON BOARDS OF SEVERAL PROFESSIONAL GROUPS INCLUDING THE ART STUDENTS’ LEAGUE, THE NATIOANAL SOCIETY OF MURAL PAINTERS AND THE LITURGIAL ARTS SOCIETY TO NAME A FEW. IN 1956 SHE WAS THE FIRST WOMAN HONORED WITH THE FINE ARTS MEDAL OF THE AMERICAN INSTITUE OF ARCHITECTS AND THE FIRST WOMAN APPOINTED TO THE NEW YORK ART COMMISSION.
Hildreth Meiere is finally having her overdue recognition. The first thorough exhibition of her work, “Walls Speak: The Narrative Art of Hildreth Meiere,” through June 2012, showcases her work at the Regina A. Quick Center for the Arts at St. Bonaventure University in Bonaventure, N. Y., near Buffalo. The exhibit "The Narrative Art of Hildreth Meiere," has been extended to 2012 at the National Building Museum in Washington, D. C.
The International Hildreth Meiere Association conducts activities to promote and perpetuate the legacy of Hildreth Meiere. Contact Email: info@hildrethmeiere.com Web: www.hildrethmeiere.com.
Posted by Polly Guerin at 8:25 AM 2 comments: