THE WHIMSICALITY OF FLORINE STETTHEIMER 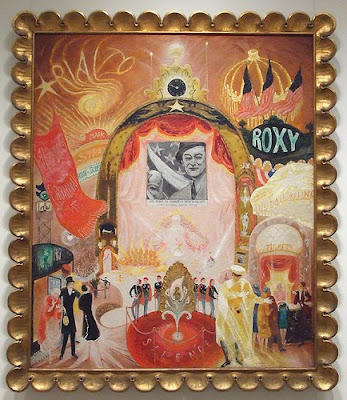 Painter Extraordinaire, Chronicler of New York Society (c)
By Polly Guerin
Dear Florine: I was originally introduced to your whimsicality when I visited the Museum of the City of New York where your sister Carrie's "Stettheimer Dollhouse" is ensconced and to which you had contributed your unique creative inspiration. The dollhouse, a depiction of an upper-class residence of the 1930s, is truly an Art Deco treasure wherein reside the Lilliputian works by your artist 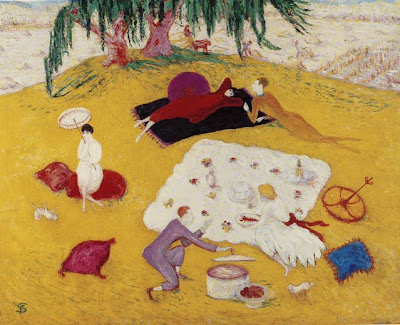 friends, including Marcel Duchamp’s “Nude Descending A Staircase,” and sculptures by William Zorach and Gaston Lachaise to name a few. I was so inspired by this dollhouse that I wrote a time-travel murder mystery novel called, “The Dollhouse Murder,” a story that dwells in the fantasy of Miss Carrie’s dollhouse with you and Duchamp as central characters, as well as the Baron and Baroness de Meyer and Alexander Archipenko.
FLORINE’S BRILLIANT CAREER
However, Florine, this is about your brilliant career as painter, poet, designer and social hostess extraordinaire, yet even at your death in 1944 you were somehow unrecognized for your brilliant repartee on the social life of the upper-class in New York between WWI and WWII. This may partially be due to the fact that Florine decided not to show her work in a came to the studio she maintained in the Beaux Arts Building at 80 West 40th Street, on Bryant Park. With its gilded furniture and cellophane drapes Florine’s studio was the background for the fashionistas and artists of the era to convene and socialize.
A FOLKLORIC DECORATIVE STYLE
Florine’s whimsicality in a modernist style, all of her own invention, portrays decorative detail and joyful brilliant colors that gives us pause to admire her as an amazing Art Deco diva. Her paintings reveal a naïve modernism of simple forms and vivid colors depicting friends and family with a wry intimacy and warmth, like Sunday Afternoon in the Country (1917). This fantasy portrayal of the cognoscenti leisurely passing the time include friends from Florine’s circle, The Baron and Baroness de Meyer, the Marquis de Buenavista, and Edward Steichen photographing Marcel Duchamp and Florine at her easel.
A DECORATIVE STYLE
Florine’s paintings were never literal but rather the viewer entered a magical world conceived with a bit of frivolity. In Picnic at Bedford Hills (1918), another example of the artist’s oeuvre, Florine sits alone holding a parasol; her sister Ettie is recumbent on a carpet in conversation with Elie Nadelman and her sister Carrie with Marcel Duchamp are setting out the picnic repast. It recalls a languid summer’s day executed in vivid colors and painted on a field of bright yellow. Florine’s Cathedrals series: The Cathedrals of Broadway (1929) and the Cathedrals of Fifth Avenue (1931) and the Cathedrals of Wall Street (1932) are each crammed with identifiable public figures and places in caricatured allegories. These three paintings reside in the American Wing of the Metropolitan Museum of Art.
HOSTESS OF AN AMERICAN SALON
Florine and her two sisters Miss Carrie and Miss Ettie, and their mother Rosetta presided over a New York salon that had considerable to do with shaping the intellectual and cultural pulse of the city. The artistic cognoscenti of the era were frequent visitors to teas, lunches or dinners, while others in the art circle coveted an invitation. An important addition to Florine’s circle was Marcel Duchamp, an avant-garde artist, a suavely handsome and cultivated personality who felt quite at home in the genteel intellectual circles of the female ménage. Duchamp figures importantly in privileged position in life pervades her work chronicling boating parties, picnics, summertime escapades, parades and society.
BORN TO PRIVILEGE
Florine was born in Rochester, New York (August 29, 187l-May 11, 1944) the fourth of five children to Rosetta Walter and Joseph Stettheimer. The members of her family were wealthy and influential assimilated Jews. Although the father abandoned the family for reasons that are unclear Rosetta never remarried and her three youngest daughters, Carrie, Florine and Ettie remained single and lived with their mother until her death in 1935. The family spent much of Florine’s early life with extensive travels throughout Europe where she began to study art. In the mid-1890s she studied at the Art Students League of New York, but realized her full potential upon her permanent return to New York which was precipitated by the start of World War I.
FLAUNTING PAGEANTRY With MIRTH
Upon assessing Florine’s oeuvre it is clear that her privileged position invades her work with lively, colorful accounts not only of her daily life but in whimsical paintings that chronicle of the upper-class ways of New Yorkers. Look deeper into Florine’s paintings and you will see that this amazing Art Deco diva freely depicted a magical world that remains as enchanting today and evocative of admiration.
Posted by Polly Guerin at 5:35 PM No comments: