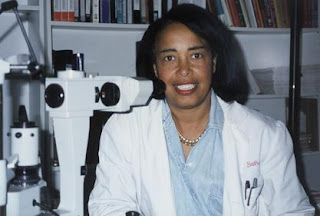 Imagine being born in the 1940s with the stresses associated with Harlem and World War II pending. One would not likely expect that a beautiful Black woman would emerge out of this chaos to become a renowned scientist. Notwithstanding obstacles the famous African-American inventor, Dr. Patricia Bath was a woman determined to succeed in an area of medicine where few women would have cared or been able to infiltrate. One of Dr. Bath’s finest achievements is the Laserphaco Probe which through cataract surgery gave people new vision. Kudos to you Dr. Bath, your brilliant mind inspires all women today to pursue their dream. OVERCOMING OBSTACLES Dr. Bath remembers, “Sexism, racism, and relative poverty were the obstacles which I faced as a young girl growing up in Harlem. There were no women physicians I knew of and surgery was a male-dominated profession, no high schools existed in Harlem, a predominately Black community; additionally Blacks were excluded from numerous medical schools and medical societies; and, my family did not possess the funds to send me to medical school.” However, her mother encouraged Patricia to read constantly and broadened her interest in science by buying her a chemistry set.
DEVELOPING LASERPHACO PROBE Image living in a world of hazy, cloudy vision that would result in total darkness? Before 1985 this was the plight of those with cataracts who did not want to risk surgery with a mechanical grinder. Doctor Bath’s passionate dedication to the treatment and prevention of blindness led her to develop the Cataract Laserphaco Probe; designed to use the power of a laser to quickly and painlessly vaporize cataracts from patients’ eyes.
FIRST AFRICAN AMERICAN FEMALE DOCTOR’S PATENT Dr. Bath a New York based ophthalmologist, was living in Los angles when she received her first patent in 1988, thus becoming the first African-American female doctor to patent a medical invention. Her patent was for removing cataract lenses transformed eye surgery making the procedure more accurate. The difference between the old method and her new invention was the difference between the use of highly accurate laser technology and the somewhat subjective accuracy of a mechanical device. With yet another invention Dr. Bath was able to restore sight to people who had been blind for over 30 years.
A MERIT AWARD Science was at the heart of her ambition form the start. Patricia served as editor of the Charles Evans Hughes High School science paper and was selected from a vast number of students from across the country for a summer program sponsored by the National Science Foundation. She was only 16 years old she worked in the field of cancer research and her mentor, Dr. Robert Bernard incorporated parts of her research into a joint scientific paper which he presented in Washington, D.C. Due to the resulting publicity, Mademoiselle Magazine presented Patricia with its 1960 Merit Award.
ACADEMIC ACHIEVER Further on Patricia graduated from Howard University School of Medicine in 1968. Her reputation as an acclaimed scientist was acknowledged in 1975, when Dr. Bath became the first African-American woman surgeon at the UCLA Medical Center and the first woman to be on the faculty of the UCLA Jules Stein Eye Institute. Need I say more? In her remarkable journey she founded and was the first president of the American Institute for the Prevention of Blindness.
DOCTOR PATRICIA BATH WAS ELECTED TO HUNTER COLLEGE HALL OF FAME IN 1988 AND ELECTED AS HOWARD UNIVERSITY PIONEER IN ACADEMIC MEDICINE IN 1993. WITH REVERENCE WE STAND IN AWE AND ADMIRATION FOR HER COURAGE AND INSPIRATION , AND DETERMINATION TO SUCCEED.