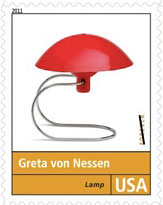 Greta von Nessen may not be a household word today but when she created the Anywhere Lamp in 195l there was nothing like it, but at the same time, there was absolutely nothing new about it; all the lamp’s parts had been available as early as the 1920s. Amazing! She was an innovator, a style caster of a modern style. Greta decided instead of totally reinventing the wheel, to wield already-been made parts together (each from a different design periods) to create something new. Greta von Nessen was a woman determined to succeed in a man’s world where so few women had made their mark. In a sense her lamp was a game-changer-or at least parts the effort towards taking design to its next level.
WHAT IS INDUSTRIAL DESIGN? It emerged as a profession in the 1920s but took firmer hold in the depression the United States. After the stuffiness of previous eras manufacturers turned to industrial designers to give their products a modern look that would attract consumer appeal. It was a fresh new beginning and the timing was fortuitous. At a time when the country was at a low-ebb, the new streamlined works evoked a sense of speed and efficiency and projected the image of progress. At the same time, it allowed corporations to mass produce items and industrial designers lowered the costs by exploiting new materials like plastic, vinyl, chrome, aluminum creating works through molds and shaping. Resulting affordable prices and a growing prosperity helped to drive popular demand for modernism.
GRETA BEHIND HER MAN Greta was the widow of the industrial designer, Walter Von Nessen founder of Nessen Studios, established in 1927 in New York City, now Nessen Lamps Inc. Von Nessen was the only major designer to concentrate on innovative contemporary lighting and quickly gained a following with well known architects. After her husband’s death in 1943, Greta continued his lighting and furniture business developing designs of her own, particularly the Anywhere Lamp. She is counted among the pioneers in American industrial design and her designs have been featured at MOMA, the Modern Museum of Art and on a United States postage stamp. There seems to be very little biographical date about Great except that she was an American born in Sweden in 1900 and died in 1978.

GRETA VON NESSEN, ONE OF THE PIONEERS IN INDUSTRIAL DESIGN, SERVES AS INSPIRATION FOR WOMEN TODAY WHO WILL SET THE STANDARD FOR A NEW GENRE OF FUTURE MODERNISM.

Posted by Polly Guerin at 8:44 AM No comments: 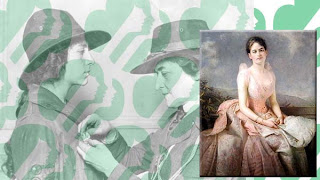 When I visited Savannah, Georgia I was delighted with the quaint neighborhoods with their English style gardens and Victorian houses, and in this unlikely place I discovered Juliette ‘Daisy’ Gordon Low, the daughter of a proper Southern family who gave girls a voice before the country even gave women the vote. On March 12, 1912 she established the Girl Scouts in Savannah and from a single troop of 18 girls; the Girl Scouts has grown to an international organization of 10 million members in 145 countries. On the occasion of the Girl Scouts of the USA, which celebrates its 100th anniversary in 2012, we pay tribute to “Daisy,” as everyone knew her, a woman determined to succeed, and did so at a time when it was unthinkable that an elite Southern girl would prepare for a career. Pictured left: Daisy pins an achievement award on one of her Girl Scouts. Inset: Daisy as a young Southern society debutante.
‘DAISY’ ON THE VERGE Daisy was the product of the genteel South and the daughter of a wealthy cotton broker, as cotton was King in Savannah her father was wealthy and could indulge his daughter. Very little was expected of her and she could have gone on her merry way after attending finishing school to engage in cultural pursuits, but most certainly her first priority was to land a husband. That’s exactly what daisy did, she feel hopelessly in love with William Mackay Low, called ‘Willy,’ the heir to a British fortune.
THE UPPER CRUST This fairytale romance culminated in stunning society marriage in Savannah in 1886. Tragedy began at the start when a piece of rice tossed at the newlyweds logged in Daisy’s ear and that exacerbated an already existing poor hearing problem. When a doctor attempting to remove the rice punctured her eardrum she lost most of her good hearing as well. A feisty woman, Daisy’s near deafness did not slow her down but the antics of the British upper class were her undoing. Her philandering husband drank to excess and he made no attempt to conceal his affair.
BREAKING AWAY When the Spanish-American War broke out in 1898 and the impending divorce, and the untimely demise of her husband, Daisy found herself a widow in her 40s, but she decided it is never too late to change your life. So she headed back to America determined and made life-changing decisions. As fate would have it, at a luncheon she met retired general Robert Baden-Powell, a hero of the second Boer War, who regaled her about his scouting program for the Boy Scouts. This encounter began a lifelong relationship with Powell and she caught the spirit of the message. So much so that using her personal fortune, her society contacts and her personal connection with Powell Daisy introduced Girl Guides to America.
SELF HELP BOOK Daisy was an innovator and she helped write and publish “How Girls Can Help Their Country,” a feminist self-help book before either term even existed. Eventually the Girl Guides name was changed to Girl Scouts but they do more than sell cookies: they teach respect, confidence, compassion and leadership. The philosophy or the organization and the activities and projects the girls participate in are the inspiration of its founder Juliette ‘Daisy’ Gordon Low. At first parents were reluctant to let their daughters join a group promoting independence, but relented when it became apparent that self-improvement far outweighed any thought of revolution. The Girl Scouts uniform gave the members of the troop a sense of true belonging to a new breed of young women who would pave the way for independence.

WE SALUTE JULIETTE ‘DAISY’ GORDON LOW; A WOMAN DETERMINED TO SUCCEED WHERE NO OTHER HAD VENTURED BEFORE CREATING THE GIRL SCOUTS OF AMERICAN A POWERFUL ICON FOR MILLIONS OF YOUNG WOMEN. TODAY THE GIRL SCOUTS HAS GROWN TO AN ORGANIZATION OF 3.3 MILLION ACTIVE MEMBERS, 50 MILLION ALUMNAE AND TROOPS IN 92 COUNTRIES.

Posted by Polly Guerin at 11:14 AM No comments: