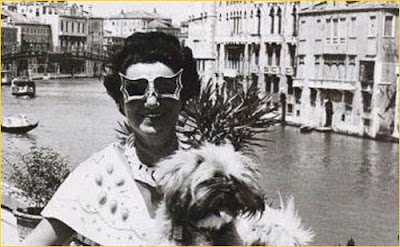 Dear Peggy: I first saw your extraordinary art collection at the Palazzo Venier dei Leoni on the Grand Canal in Venice when I took twenty college students from the Fashion Institute of Technology on a whirlwind fashion tour several years ago. In an attempt to include some cultural venues to the fashion expedition I took the students to Venice to view your magnificent collection of modern art. They were in awe of the art works as well as your sculptures in the garden, but more than that your presence, though absent, was felt deeply and inspired their vivid reports back to the college. Your name is synonymous with the Guggenheim Museum yet you carved out a life determined to succeed as an independent art collector who bought art, not as an investment, but primarily because you loved them.
THE HEIRESS AND ART
It certainly makes a big difference if you have enormous wealth to support purchasing art, sometimes even picking up works of art even if they didn’t sell. However, Peggy was unique and became a true patron of the arts discovering among modern artists Jackson Pollock when he was working as a humble carpenter in the Solomon Guggenheim museum. Peggy was a unique woman, born in 1898 to a wealthy New York City family. Her lineage gave her certain advantages. Peggy’s father was Benjamin Guggenheim and she was the niece of Solomon R. Guggenheim, who established the Solomon R. Guggenheim Foundation. However, her education in modern art did not begin until 1920 when she inherited from her father, who went down with the Titanic in 1912, a trust fund with an income of $22.500 a year. With her inheritance Peggy Guggenheim could have chosen to play the role of a socialite among New York’s tony social set, but she became something more than that: an avid art collector who safeguarded modern art from obscurity.
THE AVANT-GARDE CONNECTION
With such financial resources Peggy realized her desire to carve out a life of her own. When Peggy was twenty-two, she traveled to Europe and discovered the literary and art worlds in Paris and lived there on and off for some twenty years returning to New York sporadically. She made Paris her home base and quickly immersed herself in the arty circles. Peggy became celebrated not only as a patron and collector of modern art, but also for her love affairs with important artists including Max Ernst, Jackson Pollock and Samuel Beckett. A dedicated collector she acquired Constantin Brancusi’s “Bird in Space and works by the abstract painter Robert Delaunay. In 1938 she opened the gallery Guggenheim Jeune in London and Marcel Duchamp was her chief advisor showing the first one man show for Wassily Kandinsky, the abstract expressionist, and Yves Tanguy, the surrealist painter’s work, Le Soleil dans son ecrin (The Sun in a casket) 1937. In 1942 on the advice of the surrealist painter Max Ernst and the poet Andre Breton she continued to add to her collection and opened the gallery Art of This Century in New York. Venice beckoned in 1949 and she moved into the Palazzo Venier dei Leoni, where she installed her remarkable collection of modern art.
LOVE AFFAIRS AND FAMILY
Peggy coveted both art and lovers and became notorious for her overt love affairs, such was her free spirit. However, she did sandwich in several marriages. On one of her visits to New York when visiting a gallery owned by a cousin, Harold Loeb, she met Laurence Vail, a Dada sculptor and writer who was part of the avant-garde intelligentsia in Greenwich Village. They married two years later and had two children, Michael Sindbad and Pegeen Vail Guggenheim. The marriage ended and in 1928 she met and formed a relationship with the English intellectual John Holms, never a success he was a man who suffered from writer’s block. They engaged in a tempestuous alliance that was riddled with drunken harangues and boisterous rows. Her second husband was Max Ernst, in 1941. Another liaison was with Kenneth McPherson with whom she felt comforted and safe, and they eventually became the best of friends. Throughout her days in Venice Peggy was always surrounded by her beloved Lhasa terriers and when she died she was interred in the sculpture garden of her home next to her beloved dogs inside the Peggy Guggenheim Museum, the Palazzo Venier dei Leoni.
PEGGY GUGGENHEIM’S MODERN ART COLLECTION IS HER MOST DURABLE ACHIEVEMENT NOT ONLY AS A PATRON, BUT AS A PHILANTHROPIST SHE HELPED ARTISTS AND FOUNDED A PUBLIC MUSEUM.
Posted by Polly Guerin at 12:07 PM