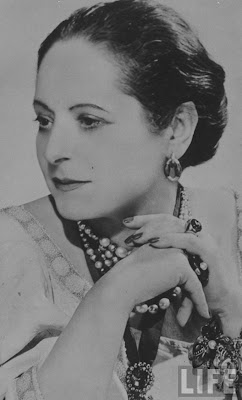 Dear Helena: Aladdin may have had his lamp, but you had a magical elixir, a simple face cream that eventually made you one of the world’s richest women. Determined to succeed with little else at first but your milky complexion and pots of gold you became a legendary beauty authority, industrial pioneer, patron of the arts and philanthropist. Who would have imagined that Chaja Rubinstein (later adapting the first name Helena), the eldest of eight children born December 25, 1870 to Augusta and Horace Rubinstein in Cracow, Poland would shape the way generations of women see themselves. Like loyal subjects women bowed at your beauty throne to acquire the cream that made the Helena Rubinstein Empire a reality.
AUSTRALIAN OPPORTUNITY
At the age of eighteen, Helena immigrated to Australia in 1902 arriving with no money and little English. However, Helena’s milky complexion and stylish clothes did not go unnoticed by the Melbourne ladies. She noticed that the Australian women had rough reddish faces that required attention. At a time when career opportunities for women were virtually nonexistent Helena Rubinstein created a successful business enterprise. She opened a modest shop in Melbourne where she dispensed her “Crème Valaze,” supposedly including herbs imported “from the Carpathian Mountains”. Costing ten pence and selling for six shillings, it walked off the shelves as fast as she could fill the pots.
THE SECRET INGREDIENT
Fortunately a key ingredient for the beauty cream was readily on hand. Coleraine, in Western Victoria, might not have seemed the likely place to find the gold for Helena’s cream, but the secret ingredient came from sheep, some 75 million merinos that produced the finest wool, secreting abundant grease in the process. To disguise the ship oil’s pungent pong, Rubinstein experimented with lavender, pine bark and water lilies. Helena’s cream was an enormous success and she could soon afford to open a salon in fashionable Collins Street, selling glamour as a science to clients whose skin was ‘diagnosed’ and a suitable treatment prescribed.
A SUCCESSFUL BUSINESS ENTERPRISE
Helena knew that women craved the attention and coveted the beauty results of her Crème Valaze. So overwhelmingly was her success that she went to London in 1902 and financed a Salon de Beaute Valaze, to Paris in 1906, and to New York in 1912. As such, Helena formed one of the world’s first cosmetic companies. Remember, this was accomplished at a time when women could not obtain bank loans, so the money was her own. Helena was a brilliant innovator in developing her business so that it required beauty routines and women to dispense advice. She trained sales people to teach women skin care and inaugurated a “Day of Beauty” in her salons, which became an instant success.
GETTING PERSONAL
In 1937 after a shaky marriage she divorced her husband Edward William Titus in London. They had two sons, Roy Valentine Titus and Horace Titus. Eager to pursue a regal title to call her own in 1938 she married the self-proclaimed Prince Artchil Gourielli-Tchkonia, a Georgian royal twenty-three years her junior, which enabled her to pass herself off as Helena Princess Gourielli. Always alert to market trends Madame developed a line of male cosmetics which bore his name. Author, Ruth Brandon relates in her book, “Ugly Beauty,” that the war also boosted Rubinstein’s business. Because “glamour was recognized as being of the greatest psychological importance” in the Allied countries, cosmetics sales spiked and Rubinstein’s company’s profits nearly doubled between 1941 and 1942 alone. During the same time Madame also sold the United States Army kits of toiletries for every G. I. deployed in the invasion of North Africa; sunscreen and camouflage makeup, not to mention deodorant and cologne which became lucrative new additions to her product line.
HELENA RUBINSTEIN FOUNDATION
As Helena Rubinstein’s business grew, so did her interest in the arts and philanthropy. Later in life she used her enormous wealth to support charitable institutions in the fields of education, art and health. She was a friend and patron of many artists and also accumulated significant collections of African sculpture, modern paintings, Oriental and Oceanic art and Egyptian antiquities. In 1953 she created the Helena Rubinstein Foundation, which provided the necessary funds to organizations concerned with health, medical research and rehabilitation. The Foundation also supported and awarded scholarships to Israelis. In 1959, she went to Moscow where she officially represented the cosmetic industry in the United States at the American National Exhibition. She died April 1, 1965, aged 94.
One of Rubinstein’s numerous mantras is: “There are no ugly women, only lazy ones.” Some say that Helena Rubinstein was a ruthless entrepreneur, but to a multitude of women she was “The Queen of Beauty.”
Posted by Polly Guerin at 12:42 PM