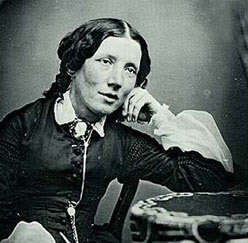 Never underestimate the power of the mighty pen. Harriet Beecher Stowe the author of the anti-slavery novel, “Uncle Tom’s Cabin” it is said helped prompt the start of the American Civil War. Little did she know that her destiny would be forged in raising awareness of the plight of African-American salves during the 19th century. Harriet Elizabeth “Hattie Beecher was born 200 years ago on June 14, 1811 in Litchfield, Connecticut the sixth of 11 children into a family of powerful and very demanding individuals. The foundation of family values, social service and activism was at the gore of her upbringing. She was a woman progressive in her values and ideals and was determined to succeed. In an era when most women were not formally educated she and her sisters were educated and devoutly Christian. All of her brothers like their father, Lyman Beecher, a fiery, Evangelical Calvinist, became ministers and her sisters were both pioneers in advancing women’s education and voting rights. Harriet choose to do it through the powerful written words of activism.
AN AUTHOR EMERGES In 1832 Harriet’s family moved to Cincinnati, Ohio, when her father was made the president of the Lane Theological Seminary. It was at this time that Harriet made her first attempts at writing fiction and her writing career was well underway with the publication of two novels before her marriage in 1836 to theology professor Calvin Stowe. The couple opposed slavery and was active in the abolitionist movement and housed runaway slaves from the south and assisted the Underground Railroad. During this time they had seven children but it was the death of her toddler child that inspired Stowe to write about slavery. With a mother’s heart torn by the loss of her child she sympathized with the slave mothers who were forced to give up their children to be sold. She also had the opportunity to visit the South and observed the operation of the slave system there. The riveting details of this trip further fueled her pen.
UNCLE TOM’S CABIN Harriet’s husband Calvin Stowe was called to a position at Bowdoin College in Brunswick, Maine where Harriet set about writing Uncle Tom’s Cabin. The action of the book traces the passage of the slave Uncle Tom through the hands of three owners, each meant to represent a type of Southern figure, the last being the wicked Simon Legree, who causes the death of Uncle Tom. The successful dash for freedom taken by Georg and Eliza is the high point of the book. The story was first conceived as installments and appeared in serial form from 1851 to 1852 in the National Era, a Washington, D.C. anti-slavery newspaper. Harriet wrote more than 40 installments but the book was published in 1852 in a two-volume edition by the house of John P. Jewett. It sold three hundred thousand copies in its first year and a best seller worldwide.
WILD CRITICISM ERUPTED In the North there were universal charges that the world of the slave had been misrepresented and in the South retaliation hit the newspapers in a flood of criticism. Stowe answered her critics in 1853 with “A Key to Uncle Tom’s Cabin,” to document the facts in the novel. Harriet also responded to her success by traveling and lecturing widely, receiving her just due and praise in England and in Europe. She never lacked a devoted and enthusiastic American audience and in 1862 when she was introduced to President Abraham Lincoln, he is said to have exclaimed, “So this is the little lady who started our big war!”
Harriet Beecher Stowe published more than 30 books in her lifetime but she is best known for a crusading sense of social and political responsibility. Uncle Tom’s Cabin remains a classic product of the culture of her time and made her one of the most widely known American women wrtiers of the 19th century. In later life she returned to her home state, where she died on July 1, 1896 at age 85 in Hartford, Connecticut.
Posted by Polly Guerin at 7:25 AM