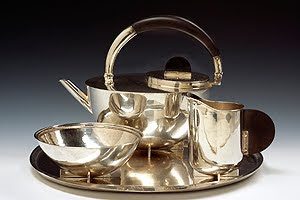 Not to be confused with the Edgar Brandt, modernist, Marianne Brandt, born in Chemnitz in 1893 as Marianne Liebe, became a Bauhaus metalist whose name and design innovations rank among those of Marcel Breuer, Mies van Der Rohe and Walter Gropius. She started out as a painter, studying from 1911 to 1918 at the Hochschule fur Bildende Kunst in Weimar, and did a brief stint as a freelance painter before marrying the Norwegian painter Erick Brandt in 1919. The couple lived in Norway and the South of France until 1922. In 1923 Marianne Brandt and her husband moved to Weimar but Erik Brandt returned alone to Norway the same year although the Brandt’s did not divorce until 1935. Abandoning painting Marianne Brandt destroyed most of her paintings and drawings and at the age of 32, in 1924 she joined the Weimar Bauhaus. She was a woman determined to succeed by breaking through barriers that barred women Marianne Brandt became the first woman to head of the metal workshop at the Weimer Bauhaus in 1928. Brandt’s designs for household objects such as lamps, ashtrays and teapots are considered the harbinger of modern industrial design.
THE BAUHAUS PHILOSOPHY
The famous glass and steel educational complex were Marianne Brandt studied was brilliantly Bauhaus: Form follows function. It became the icon of Modernism, of the International Style. The workshops were the core curriculum, even for master artists and out of them came daily objects at affordable prices. She became a student of Hungarian modernist theorist and designer Laszlo Moholy-Nagy who realized what a talented designer Marianne Brandt was and nurtured her gifts and admitted her to the metalworking workshop. Brandt was one of the few women to have excelled in the man’s world of design. Until her arrival at the Bauhaus, women students had been forced to study ceramics or weaving but thanks to her mentor, Moholy-Nagy, she was the first woman to be admitted into the male bastion of the metal workshops.
QUICK RECOGNITION OF SKILLS
In the metal workshop Marianne quickly rose to the position of workshop assistant. The years 1924-1929 saw Marianne Brandt design numerous utilitarian objects and lamps. She eventually succeeded Moholy as the workshop’s director in 1928 and in the post she negotiated some of the most important Bauhaus contracts for collaborations with industry, launching some of her lamp deigns on a mass-produced basis, mainly for the lighting firm of Korting & Mathiesen in Leipzig and also Schwintzer & Graff in Berlin.
THE TALE OF THE TEAPOT
Perhaps the most stunning of her accomplishments of hand wrought designs is an exceptionally rare silver and ebony tea service which exemplifies the best of the German Bauhaus’s modernist aesthetics and functional ideals. The tea service pictured here rejects ornamentation for simple geometric forms like cylinders, spheres and hemispheres. It also reveals the famed school’s emphasis on function: the push-on lid of the teapot, placed away from the spout, does not drip, and the wood knobs provide heat-resistant grips. The teapot was one of several prototypes designed and made by Brandt, when she was a student, and later a teacher in the Bauhaus metal workshop.
THE TEAPOT AND ITS CREATOR
Brandt made the original prototype in 1924, her first year in the metal workshop, which was then run by the charismatic Hungarian constructionist Laszlo Moholy-Nagy. The design was inspired by Moholy-Nagy’s constructivist style. However, Brandt strove to ensure that the teapot’s form was directly related to its function. Brandt created an abstract sculpture, which at the same time, is a teapot. According to Richard A. Born, senior curator, Smart Museum of Art, University of Chicago, “The tea service, designed by Marianne Brandt and created by hand in the school’s workshops , consists of tea infuser (pot), creamer, sugar bowl and tray in sterling silver and ebony. The service is firmly set in the tradition of costly craft-based metalworking and was likely intended for a well-heeled clientele receptive to progressive interior design—a point that underscores the limitations of the Bauhaus’s social agenda of mass-produced and affordable domestic items of good design.”
NEW HORIZONS
After leaving the Bauhaus for Berlin in 1929, Brandt was briefly employed by Walter Gropius’ architecture practice in Berlin. She designed mass-produced and modular furniture for the interiors of the public housing project in Karlsruhe-Dammerstock. She subsequently became head of metal design at the Ruppel firm in Gotha, where she remained until losing her job in the midst of the ongoing financial depression in 1932. During the l930s, when Gropius and Moholy and other Bauhauslers fled Nazi Germany, she returned to her hometown of Chemnitz to look after her family.
DERIDED AS A ‘DECADENT’ BAUHAUSLER, MARIANNE BRANDT WAS UNEMPLOYABLE UNDER BOTH THE NAZIS AND THE EAST GERMAN COMMUNISTS AFTER WORLD WAR II. SHE REMAINED ISOLATED ON THE ICY SIDE OF THE IRON CURTAIN UNTIL HER DEATH IN 1983. SOME OF HER BAUHAUS DESIGNS HAVE EVEN GONE INTO PRODUCTION, BUT SADLY NOT THE TEAPOT SERVICE. MARIANNE BRANDT WAS OFTEN OVERLOOKED BUT TODAY SHE IS RECEIVING HER DUE RECOGNITION AS A MAJOR BAUHAUSLER AND CELEBRATED ALONG WITH WALTER GROPIUS, MARCEL BREUER, MIES VAN DER ROHE. SHE WAS A MODERN WOMAN AHEAD OF HER TIME AND BROKE THROUGH THE MALE BASTIAN IN METAL CRAFSMANSHIP IN 1924.
Posted by Polly Guerin at 8:41 AM

Labels: BRANT, MARIANNE THE FEMALE METALIST IN THE BAUHAUS