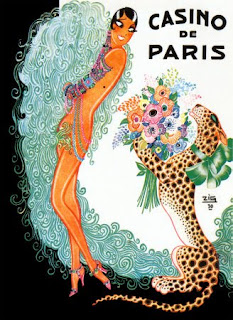 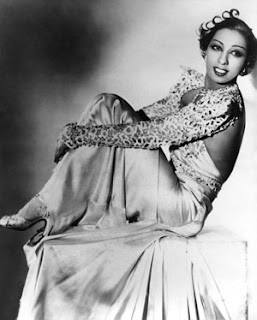 Dear Josephine: Your legendary performance in Paris conquering racial prejudice, your Rainbow tribe of adopted children , and your amazing espionage work during WWII all add up to words: Stupendous, Amazing Diva, Formidable!!! The world may remember your beautiful dancing body, costumed for the Danse des Bananes (Banana Dance), but by the 1930s recognized as a sensation, chanteuse extraordinaire and a movie star, you were Europe's highest-paid entertainer. Your elegant fashion style was the height of chic and imitators of your celebrity followed.
CHEZ JOSPEHINE
My vicarious thrill of visiting the restaurant, Chez Josephine, named after the club Chez Josephine, which you opened in Paris in 1926, brought back remembrances of an extraordinary individual, a woman of steel but with a sensuous body that one reviewer said, "She is in constant motion, her body writhing like a snake." The Chez Josephine restaurant that honors your name and your memory, owned and run by your adopted sons Jean-Claude and Jarry (Jari) in Theatre Row, 42nd Street, New York, is as beguiling and enticing as the memory of "La Baker," the first Black superstar given the nicknames the "Bronze Venus" or the "Black Pearl."
Le Revue Negre
Rising from humble birth, Josephine's early years were desolate to say the least. Living as a street child in the black slums of St. Louis, her street corner dancing attracted attention and she was recruited for the St. Louis Chorus vaudeville show. From there Josephine made her name as a vaudeville cutup and dancer during the Harlem Renaissance, performing in "Tan Town Topics" revue in 1925 in the Plantation Club, above the Winter Garden Theater (Broadway and 50th Street). Later Josephine landed in the chorus of the popular Broadway revues Shuffle Along (1922) and The Chocolate Dandies (1924). Perhaps it was as the last dancer in the chorus line that Baker honed her skills as a comedian for in this position the dancer was expected to perform in a comic manner, as if she was unable to remember the dance, until the encore, when she recovered and performed with additional complexity. But it was her performances in Paris at the age of 19, when she appeared in La Revue Negre as an exotic "savage," topless and barefoot, dressed only in a skirt of feathers (the bananas came later) that transformed her into a Paris sensation. Baker's success coincided with the Exposition Internationale des Arts Decoratifs et Industriels Modernes (Paris, 1925), which later gave us the term "Art Deco." The event included exhibitions of ethnicity including African art and Baker represented the Black Goddess--a sensual, creative force and fashionable icon of the era.
Chiquita Her Pet Cheetah
In later shows in Paris, 1930, she was often accompanied on stage by her famous pet cheetah, Chiquita, who was adorned with a diamond collar. "One night the cheetah escaped from Josephine's compound of animals and made his way to a house in an adjoining village and tried to climb into bed with an elderly lady. When the officials demanded that Chiquita be put in a zoo, Josephine lowered her head mourned its absence saying, "He died." As far as Josephine was concerned, her jungle cat behind bars at the Jardin D'Acclimatation might as well have been dead." (Wm Wiser, The Great Good Place/W.W.Norton & Co.)
PEPITO, HER MANAGER
Under the management of Giuseppe Abatino, or Pepito, a self-appointed royal who sometimes assumed the title Count of Albertini, Josephine's reputation changed dramatically and her stage and singing voice went from being a 'petite danseuse sauvage' with a decent voice to 'la grande diva magnifique.' Pepito had a quick study of manners and mores, and passed on these refinements to Josephine, transforming her into a woman of fashionable chic. Josephine could be seen crossing the Pont Royal with Chiquita, her jewel-collared pet to coordinate with her matching outfit.
Honors & The Rainbow Tribe
Josephine most successful song, "J'ai Deux Amours" (Two Loves Have I), 1931 reflected her affection for France and when World War II broke out, she volunteered to spy for her adopted country. She devoted herself towards raising funds for De Gaulle's Free French forces and operated as a spy during her travels. However, none of the honors received---the Legion of d'Honneur, the Medaille de la Resistance and the Croix de Guerre for her military service---nor the celebrity attached to the name 'Josephine Baker' could pevent the foreclosure and loss of her chateau, Les Milandes, in 1969. Long before Modanna and Angelina, Josephine Baker was the ultimate celebrity adopter. The chateau, a home for her adopted family, housed twelve orphaned children, of various hues and personalities, collected in the countries throughout the world where she had performed, an international family of outcast infants she called the Rainbow Tribe. In the spirit of the United Nations and "the Family of Man," Baker wanted to show that people from anywhere could live together in what she called, the "Village du Monde." (World Village) She was the first entertainer to create a virtual theme park with a simulated African village, J-shaped swimming pool and even a nightclub with herself as the main attraction. However, Josephine's extravagances and mounting debts forced the chateau's closure and the court evicted her and the children in 1969.
Homage to Baker
It is comforting to know that Baker's extraordinary story, objet d'art, posters, costumes and film clips are preserved in the Chateau des Milandes Museum in southwestern France. One can tour the chateau and even see one of the children's bedrooms as well as Baker's unprecedented taste for personal luxury. Long Live "La Baker"style. http://www.milandes.com/.