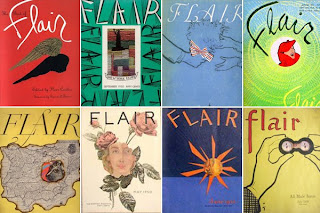 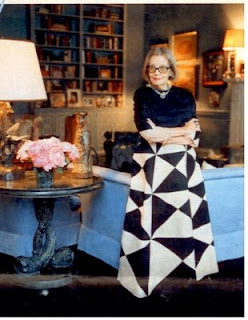 Dear Fleur: When I first met you at the Lowell hotel in New York City in 2003 you were ever more the embodiment of a remarkable woman, the vibrant author, painter, ambassador, hostess, philanthropist, raconteur and most famously the creator and editor of FlAIR Magazine. The magazine's legendary keyhole covers with distinctive peekaboo cut outs, fold outs and pop-ups intrigued and mesmerized readers who coveted each issue for its artistic pleasures.The reproductions of artworks and a variety of paper stocks created an a magazine of amazing novelty. Famed artists including Rene Gruau, who enlivened such magazines as Marie-Claire and Femina in the 30s,, contributed to its pages. At the time I interviewed Fleur she said, "The magazine has never been repeated copied or equaled, and its name and fame are still alive today. I gave my 12 FLAIR issues to the archives of the Fashion Institute of Technology, so that students may reference these remarkable journals, but I miss Flair and I miss you.
FLEUR COWLES (pronounced 'coals') took great pride in her short-lived magazine, FLAIR. It was published in the 1950s during her marriage to Gardner Cowles Jr., known as Mike, the publisher of Look Magazine. Fleur said, "I wanted each issue of Flair to be different, to be a sense of surprise. No issued followed a formula. I insisted that each issue be unexpected in its coverage and diverse topics. I intended FLAIR to be a new dimension in magazine publishing and the most beautiful publication anywhere to provide a priceless source of artistic innovation."Turning the pages of FLAIR with its die-cuts that revealed one sensational novelty after another was a graphic surprise that enhanced the reading experience. Fleur reminisces about how she created the Paris edition's double page spread with its window views of the Place Vendome. "Amusing as it may have seemed to a passerby, I simply sat in a doorway of a building, in the Place Vendome with my drawing pad and sketched out the various places of interest and these became the vignettes in the double page spread. In the magazine one couldlift the little windows and view inside the Ritz Hotel's tea garden, the boutiques of Elizabeth Arden, Coty, Elsa Schiaparelli and Lucien Lelong."Fleur Cowles, who rose from modest beginnings in New York became a social icon and friend of the powerful and famous of her era, was born, according to census records, on January 20, 1908 and died at the age of 101 in 2009. She was the daughter of Morris and Lena Friedman and her name at birth was Florence. It is alleged that around the time that she married Mike Cowles that she changed her name to Fleur.Her career began, she said, at age 15, when she became an advertising copywriter for Gimbels department store. After several marriages and a divorce from Cowles, who she divorced in 1955, Fleur married Tom Montague Meyer. Fleur gave up editing after marrying Mr. Meyer, but continued to write books and chronicled her life in her book, "She Made Friends and Kept Them" (Harper Collins). She also illustrated a number of her books, including "People As Animals," "the Flower Game" and "The Life and Times of the Rose.""I have an idea a minute," Ms. Cowles once said, "I'm a born idea myself." Fleur recommends taking life with 'no regrets' saying, "Avoid the big 'What If?' That's a terrible regret. Life is a continuous circle, it's not just about money, but about pride, advice, giving happiness, and creating one's dream."Thank You Fleur for with you as my muse I am following my dream to it's fullest potential. In 1994 the harry Ransom Humanities Center at the University of Texas, Austin, opened the Fleur Cowles Room, a replica of her study in London.
Posted by Polly Guerin at 7:43 AM 0 comments
Labels: FLAIR Magazine Caused a Sensation
Posted by Polly Guerin at 7:49 AM