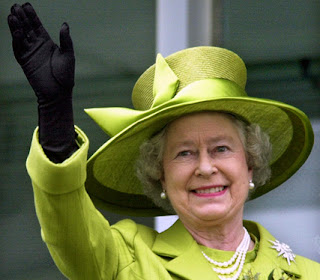 Pardon me, but did I say Queen Lizzie? I say that with the utmost of esteem for the grand lady of England, because she seems to be the kind of woman everyone can relate to and has come full circle as the Queen mum. It was in the 1953 Order of Coronation that England’s newly crowned ruler was referred to as Queen Elizabeth, Your Undoubted Queen,” but she emerged on the international scene as one of the most determine women in her lifelong performance as Queen. One can stand back in awe and admire her style and how she has fulfilled her role of service with honor and dignity. Those traits service, honor and dignity need to be brought strongly back into the collective consciousness of world leaders, corporate executives and parents today. We can thank Queen Lizzie for carrying the torch of correct behavior throughout her long life.
DRESSING WITH DIGNITY Valerie Steele, director of the Museum at the Fashion Institute of Technology, relates, “Her style is a clear portrayal of upper-class distaste for novelty and gimmick, a resistance to foreign ideas, and a reassuring matronly solidity.” Her clothes are designed for specific functionality and remember the queen mainly works standing up for hours on end with nary a complaint. You rarely see her sitting down, she is usually photographed at full length, and as petite as she is, is required to stand out in a crowd. How does she do it?
A MEGAWATT SMILE Keeping up appearances is a challenge for the 86-year-old monarch with the white set curls and megawatt smile, but like a performer, she never disappoints. Even when her family behaved badly and public opinion for the monarchy hit a low, the Queen, was steadfast and dignified in the stewardship of her family and kingdom, and remained stable and determined dealing with circumstances with a calm hand. Charged with illuminating the dullest of ribbon-cutting the Queen has evolved with a flair for making an entrance in head-to-toe color or print-coordinated ensembles: shoes, gloves, matching hat and that classic handbag, that say, Queen” every inch of the design.
INSIDER DESIGN INFO So why doesn’t her skirt rise up at the flutter of a windy breeze? Clever solution: They’re anchored down and weighted, something any executive or woman in politics should consider doing for her next outdoor appearance. To accommodate that jubilant hand wave, the armholes of her coats and jackets are cut generously. Always conscious of what to wear on a specific occasion, for foreign travel, a staff of researchers will scout out the country’s national symbols and cultural significance and what color is verboten in that place. Good advice for anyone making personal appearances on the cultural or business stage of life.
HAIL to the QUEEN Flash-forward 60 years (2012) and the nation marked the Queen’s Diamond Jubilee, making her the second-longest-serving monarch after Queen Victoria. At home in the private confines of her friends and family she loves to dress up with penchant sparkling jewels and enjoys horse racing, homeopathic remedies, keeps several corgis in tow and wears silk Hermes head scarves. She’s able bodied and a true thespian, playing out her role as “Elizabeth the Dignified,” but to us fashionistas she’s still our darling Queen Lizzie.
Throughout her six-decade reign, Queen Elizabeth weathered the likes of family tragedy, scandal and mishaps and much more behind the scenes than can be imagined, the likes of which are so similar to the misadventure of many average families. Yet the Queen has set the hallmark for Queenly behavior and motherhood, remaining as rock solid and as steadfast as Mount Everest throughout it all. Hail to the Queen, the woman determined to succeed, the truest royal that ever graced our century.