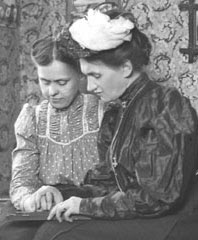 When you are the daughters of the renowned publisher, Henry Holt, the Misses Winifred and Edith Holt might just as well have carried on as any proper heiress was expected to and lead a life of social pleasure. However, the Holt sisters were of that fine breed of American women that break down barriers and forge ahead as women determined to succeed in making the world a better place for people without sight. In the 1900s the problem of helping the blind in New York City was long in waiting for an intelligent solution but no program had been established. The pioneering Holt sisters, however, take their rightful place as the founders who facilitated that solution. Their humble goal became the Lighthouse International, an organization recognized for its pioneering work in vision, rehabilitation services, education, research and advocacy which enabled people of all ages who are blind or partially sighted to lead independent and productive lives.
A SERENDIPITOUS EVENT
The custom of the day for taking the ‘grand tour’ was on the Holt sisters’ agenda. During a concert in Florence, Italy, Winifred noticed a group of blind school children in the audience who were evidently enthralled with the music. Intrigued by their participation she investigated further and discovered that a free ticket program enabled the children to attend the concert. Inspired by such a simple solution to bring pleasure to blind individuals when the Holt sister returned home they established the Lighthouse Free Ticket Bureau in 1903. Their single thought was that like the Florence ticket service they might relieve the somber lives of the blind by procuring tickets from entertainment managers or their own friend’s tickets for concerts and operas and theaters. The ticket service went on for some time, but the sisters also became increasingly aware of the world of adults who were blind and their greater purpose that was unfolding.
FOUNDING THE FIRST LIGHTHOUSE
The Holt sisters pooled their resources and borrowed $400 from their dress allowances, which was a considerable sum at the time. The visionary sisters personally gave over their family brownstone at 44 East 78th to the work for the blind, installing clerks, stenographers, and other helpers for the larger work in their hands for all those in need. Their home became a hub of workers engaged in advancing the interests and education of the blind in many ways. In order to facilitate the program of training and educating the blind the sisters themselves studied the blind alphabet with blindfolded eyes in order to understand the difficulties of learning the various demands on blind persons to perform tasks. The blind men and women were given work to do and how to do it. Women were trained to create handcraft items. If a seamstress had lost her sight she was shown how to thread a needle and how to use a studded tape. The blind showed a remarkable ability with the typewriter and other pursuits, for which they are trained before they are gainfully employed. A workshop for blind men was established at 147 E. 42nd Street, where chairs were caned and brooms were made for house and factory use and other marketable items.
LEGISLATION AT LAST
The Lighthouse organized the first census of people who were blind in New York State resulting in the astonishing number totaling nearly 10,000 cases. Furthering the sisters’ research, after many efforts, in 1904 a legislative commission was formed to investigate the conditions of the blind in New York State and an appropriation of $5,000 was secured from the State for the collecting of all the data concerning the blind. Miss Edith Holt was appointed chief to head up the commission for gathering this important information. Winifred Holt also participated in founding the New York State Commission for the Blind and Visually Handicapped.
THE LIGHTHOUSE INCORPORATES
From this early seed, in 1906 the Lighthouse was officially incorporated as The New York Association for the Blind, Inc. Home teaching and instruction began, marking the first community-based direct service—the forerunner of today’s professional vision rehabilitation services. It was a fortuitous beginning and many programs were staffed by teachers who were blind. In 1907 Winifred Holt personally traveled to Albany to draft a bill making the use of a medical measure at birth mandatory to prevent “ophthalmia neonatorum.” She also established the first lay committee to address blindness prevention. In 1988 The Lighthouse Inc. became the Lighthouse International, in recognition of its global reach---and outreach---on behalf of 180 million people who are visually impaired worldwide.
THE HOLT SISTERS LEAVE A LEGACY OF PHILANTHROPY THROUGH ACTION AND PERSEVERANCE. FOLLOWING IN THEIR LEAD THE LIGHTHOUSE TODAY CONTINUES TO OFFER NEW AND INNOVATIVE WAYS TO HELP PEOPLE OVERCOME THE CHALLENGES OF VISION LOSS AND TO LEAD PRODUCTIVE, ACTIVE AND INDEPENDENT LIVES.

Visit http://www.lighthouse.org/abouthistory/ Learn more about The Lighthouse.
Posted by Polly Guerin at 8:55 AM