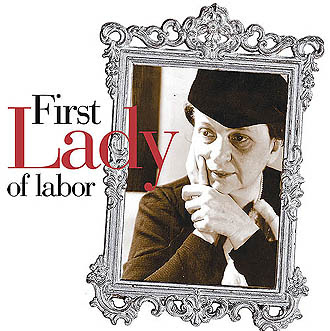 Dear Frances Perkins (Fannie Coralie Perkins 1882-1965): Fulfilling your destiny as a woman of social welfare and political action you overcame many of the restrictions and prejudices of your era and as an outstanding career woman you became an effective public official whose work profoundly changed the lives of Americans. You not only engaged in diverse social work but you committed yourself to the advancement of women, the concern for fair labor practices and the plight of working people, so it is no wonder that later in life you became the first woman, appointed by President Franklin Delano Roosevelt, to serve in the cabinet. Typical of a woman determined to succeed beyond expectations you rose to the position of Secretary of Labor and served longer than any other Secretary of labor, from 1933 to 1945. Hail to you Frances Perkins, with your devotion to improving the plight of the working masses you are indeed recognized as the "First Lady of Labor."
THE SOCIAL SECURITY ACT OF 1935
Early on as Industrial Commissioner of New York State Perkins worked hard to improve work regulations and related social programs. She fought for laws to set minimum wages, expanded factory investigations, reduced the work week to 48 hours for women and facilitated minimum wage and unemployment insurance. American citizens owe a debt of gratitude to Frances Perkins, especially when they receive their social security checks each month. Most notable she contributed to the creation of the Social Security system through her role as chairwoman on the President’s Committee on Economic Security. A report issued by the committee laid the basis for the Social Security Act of 1935. When the Fair Labor Standards Act was passed in 1938 it was again Frances Perkins who had persuaded Congress to improve labor conditions and the well-being of workers. The law also established a minimum wage.
THE NEW DEAL
The current political arena would surely benefit from the services of a woman like Frances Perkins whose diligence and vision brought about necessary labor initiatives. As Secretary of Labor, appointed in 1933 by President Franklin D. Roosevelt, Perkins played a key role in writing New Deal legislation, which resulted in the National Labor Relations Act (1935), and the creation of the National Labor Relations Board which gave workers the right to collective bargaining. Perkins was a strong advocate for government intervention for the public good and brought to her office a deep commitment to improving the lives of workers. In 1945, after serving twelve years as Secretary of Labor during Franklin D. Roosevelt’s presidency Perkins resigned and then joined the U.S. Civil Service Commission, an appointment by President Harry S. Truman.
WHO WAS FRANCES PERKINS?
Frances Perkins’ role as a political activist has roots in her belief that “poverty was preventable, destructive, wasteful and demoralizing.” Her hopes were focused on improving the quality of life for all and devoted most of her life to enhancing the public welfare. Early stirrings of political activism began when she took part in the women’s suffrage movement, marched in parades and gave street corner speeches. In 1910 w hen Perkins earned a master’s degree from pursued Columbia University Perkins she became head of the National Consumer’s League (NCL) where she lobbied for better working hours and improved working conditions.
THE TRIANGLE SHIRTWAIST FIRE
A pivotal event that impressed Frances Perkins into political action was the 1911 Triangle Shirtwaist Fire, where the building in which immigrant females worked lacked fire escapes and one newspaper account recorded that even the exit doors were locked. Along with the stunned onlookers she witnessed 146 sweatshop-factory workers leap to their deaths. She said it was “a never-to-be-forgotten reminder of why I had to spend my life fighting conditions that could permit such a tragedy.” This incident inspired Perkins to lobby harder on behalf of the workforce.
FRANCES PERKINS: WE SALUTE YOUR TENACITY, YOUR VISION, YOUR DRIVE AND YOUR DEEP CONCERN FOR THE LABOR OF THE WORKING CLASSES. TO FRANCES PERKINS WE OWE A DEBT OF GRATITUDE FOR SOCIAL SECURITY, FAIR LABOR PRACTICES AND THE NEW DEAL MANIFESTO.
Posted by Polly Guerin at 8:23 AM