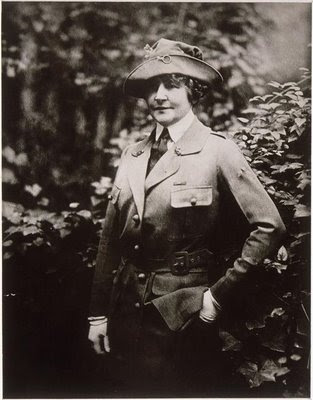 Dear Anne Tracy Morgan: Your name is synonymous with power and financial advantage but you were destined to become a woman determined to succeed beyond the boundaries of the social upper crust set. Born to privilege in 1873, you were the youngest of four children of John Pierpont Morgan, who had made an immense fortune in banking and whose bank (now JPMorgan Chase & Co.) is still a global financial services firm. Anne grew up in a wealthy household with servants and received a private education with most summers spent traveling abroad. She would discover, however, philanthropic ways to use her wealth that very few privileged women of her time would have considered. She became a dynamic leader in Anne Morgan’s War rallying up American women volunteers for relief work in France during and after World War I.
BROADENING VIEWS
As a youthful debutante Anne enjoyed the finer things in life but her life took an important departure in her 20s when she came under the influence of women from New York’s intellectual circles. In this arena of enlightenment Anne worked to address women’s social issues and focused attention on plight and needs of working women. She served as a volunteer factory inspector and established a clubroom in the Brooklyn Navy Yard so that workers could receive nutritious meals. In 1903, she became part owner of the Villa Trianon near Versailles, France, along with decorator/socialite Elsie de Wolfe and theatrical/literary agent Elisabeth Marbury. The Villa Trianon, abandoned by the French royal family after the Revolution of 1848 was the ideal setting to separate her from her domineering father and pursue her own interests.
ANNE MORGAN’S WAR
At the start of World War I, Anne was in France and she saw the terrible effects of war and was horrified by the carnage and wartime destruction. With an innate character of philanthropy Anne wanted to help the victims. She returned to the United States to collect food and clothing and relief packages to assist the devastated regions. She financed the work with her inheritance and with contributions from other Americans. Anne even persuaded Henry Ford to donate Model T ambulances. Setting such an example Anne was the leader and inspiration, and hundreds of American women left comfortable lives at home to volunteer in the devastated regions of France.
RALLYING VOLUNTEERS
Anne Morgan rallied potential volunteers and donors on speaking tours across the United States, and employed the power of documentary photography and silent film to foster a humanitarian response to the plight of French refugees. With haunting views of ruined French towns, decimated agricultural fields and livestock, public buildings, railways, bridges, schools and factories, portraits of refugees and pictures of American volunteers at work---these images tell a little known, but important story of American volunteerism during World War I. THE WOMEN’S ENCAMPMENT
Anne financed the Chemin des Dames, an encampment for women in the courtyard of the ruined seventeenth-century Chateau de Blerancourt, which served as the base of operations for the American Committee for Devastated France which she created with her friend, Anne Murray Dike. Anne Morgan with her commanding presence and social prominence took the lead in fund raising, while her colleague Anne Murray Dike, trained as a physician, organized activities in the field. The group established headquarters in Blerancourt, less than forty miles from the front living in barracks and working long hours. The American Committee provided vital services to revitalize life in a region considered by many to be beyond redemption. After the war, Anne donated the property to the town of Blerancourt, and founded a museum documenting the history of French-American cooperation.
REGOGNITION AND HONOR
When the Second World War again brought devastation to northeastern France, including Anne Morgan’s beloved Blerancourt, she took action again and formed the American Friends of France and the Comite Americain de Secours Civil, its French counterpart. Her generosity and benevolence did not go unnoticed. In 1932, Anne Morgan became the first American woman to become a commander of the French Legion of honor and the first woman to be honored with a marble plaque in the Court of Honor at the Hotel des Invalides, near Napoleon’s tomb in Paris. ANNE MORGAN’S WAR; REBUILDING DEVASTATED FRANCE 1917-1924 is on view at The Morgan Library & Museum 225 Madison Ave. through November 21, 2010. www.themorgan.org.
Posted by Polly Guerin at 7:28 AM