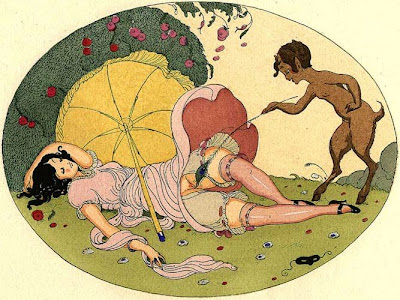 Though nearly forgotten in the history of female artists it is high time that you should be rediscovered for your playful art and strength of character. An internationally renowned Danish painter Gerda Wegener amazes by her prolific oeuvre as portraitist, graphic artist and purveyor of deluxe editions of erotic stories. Although Gerda’s career relied on her phenomenal talent, perhaps even more shocking was her notorious diligence and the advantages of an unusual marriage which opened up notoriety on a more sinister scale. It was at an art opening at the gallery of Leonard Fox, Ltd. on Madison Avenue in New York City where I found that Gerda’s works were delightful, charming, provocative and surprisingly shocking eroticism imbued with an Art Deco sensibility.
ARRIVING IN PARIS
When Gerda arrived in Paris in 1912 she was accompanied by her husband Einar Wegener, also a painter, who she married in 1904. It was the perfect environment for emerging artists, but the city had entered into a period of unprecedented upheaval. There was public outcry against certain art and music. Ravel’s ballet Daphnis et Chloe and Stravinsky’s Le Sacre du Printemps were among the public targets and even riots. The young Gerda, on the other hand, took Art Deco by storm with her adventurous spirit and superb artistry, winning numerous awards as well as commissions for portraits of Parisian society women. The French State even decorated Gerda with a Legion d’Honneur for her art.
GERDA’S PROLIFIC TALENT
Gerda was not only a rare talent she was industrious and productive. Her illustrations appeared in La Vie Parisienne, Vogue, Le Rire and La Baionette, and other premiere fashion and political journals of the day. Her artistic portrayals of fashion could be seen plastered on walls, but most notably her erotic scenes, inspired by the Art Deco movement probably found their way into the trenches of World War I. She became a very popular among the cognoscenti and sought economic success living a life of passionate pursuit of her art.
AN ARTIST’S LIFESTYLE
Gerda was no shrinking violet but was a dynamic personality fueled by an ambition to acquire the bourgeoisie ambiance and trappings of society. Together with her husband Einar, she was part of the Parisian artist scene, living a life with decadence sex and fashion. Her expensive apartment and studio was in the fashionable quartier Tour Eiffel and at their summer home on the banks of the Loire she would stage parties for two thousand invited guests. It is sad to realize that despite her prolific career and all these extravagances, in the end she died in poverty and obscurity.
GERDA’S UNUSUAL MARRIAGE
In the 1930s transformation surgery was risky and at an experimental stage. Her husband, Einar Wegener, a known transsexual, liked to disappear into the streets of Paris in one of his costumes. In female guise as “Lili”, at first he cross-dressed as a favor to Gerda, who needed a female model to pose for one of her portraits. After cross-dressing Wegener became convinced he had another personality---a female one. Urged by this realization he traveled to Germany for sex reassignment surgery and afterwards went by the name Lili Elbe. Lili lived a double life in Paris attending parties, balls and socials as Lili, and gained many admirers. Sadly Lili passed away from complications after her fifth operation. However, Gerda had supported Lili throughout her transition, but the King of Denmark declared the Wegeners’ marriage null and void in 1930.
GERDA MARRIES AGAIN
Gerda was not without admirers and along came a suitor that would rescue her and begin a new stage in her life's story. She subsequently married an Italian air force officer and diplomat, Major Fernando Porta. By all estimates they were an enviable couple, romantic and wildly in love, and moved to Morocco, settling in Marrakech and Casablanca. The marriage lasted about 8 years. She returned to Denmark in 1938, but this time her work was largely out of fashion. Although she died impoverished and largely forgotten her story comes to life in the international best seller, The Danish Girl, a novel by David Ebershoff. The novel is being developed for the screen and Nicole Kidman will be playing the role of Einar/LiLi and Charlize Theron will the playing the role of Gerda.
Posted by Polly Guerin at 8:07 AM