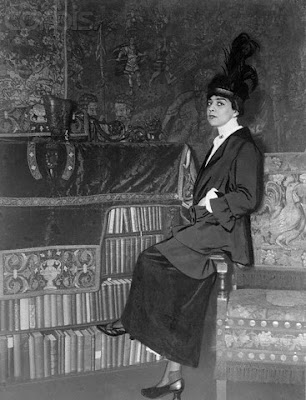 Dear Belle: Your legend goes far beyond color borders and crossed into history's archives as one of the most revered librarians. You ascended upward into elite society and crossed the great divide as the triumphant African American personal librarian of the prestigious J.P. Morgan Library. At a time when even most white women were denied job opportunities or discouraged from pursing work outside of their home you carved out a remarkable career. The year was 1905 when J.P. Morgan engaged your services, shy of five years before the suffragettes won the vote by the 19th amendment to the Constitution in 1920. Segregation was rampant at the time, but your light complexion enabled you to pass for white. Vivacious, intelligent and shrewd Belle da Costa Greene is an amazing art deco heroine in the annals of American women’s achievements.
BELLE THE LIBRARIAN
In some people’s lives ‘luck’ plays an important card of good fortune, and that was the case with Belle ad Costa Greene. J.P. Morgan had realized that his book collection had become too large for his study and engaged Charles F. McKim to build him a library to the east of his Madison Avenue brownstone. At that time J.P. Morgan’s nephew, Julius Spencer Morgan, a Princeton alumnus who was an advisor to the library, understood his uncle's need for a librarian and introduced Greene to America’s great titan of industry. She did not come to meet J.P. Morgan without credentials. Greene had been working at the Princeton University Library in Princeton, New Jersey and had honed skills that would serve her well at the Morgan Library. No doubt the brainy Belle impressed the great financier, but she was also quite beautiful and possessed a certain sensuous quality due to her exotic complexion, which helped her to pass as white.
AN OPPORTUNISTIC EVENT
The opportunity presented itself and Morgan hired her as his personal librarian. However, over and above her physical attractiveness, Morgan trusted her expertise not only because of her bargaining power with dealers, but also for her keen knowledge of illuminated manuscripts, of which Morgan had a vast collection. Trusting in her expertise, Greene had carte blanche to commit huge portions of Morgan’s fortune to establish the Morgan Library as one of the premier private collections. Throughout her tenure she would spend millions of dollars buying and selling rare manuscripts, books and art.
A LIFETIME CAREER
Greene seems to have passed over the boundaries of the racial divide more for reasons of ambition and opportunity and made the Morgan Library her lifetime career. . Alas, Greene never married but devoted her life to the development of the Morgan Library. In the role of Morgan’s emissary, Greene was determined to make Morgan’s library pre-eminent in the collection of manuscripts, bindings and the classics. She had the enviable position of being in the center of the art world for over 43 years, and every dealer coveted her friendship. As a result she moved with ease in elite society and enjoyed the company of the super rich patrons of the arts.
A FASHIONABLE WOMAN
With Morgan’s largesse, Greene’s unlimited means attracted attention as did her bearing and fashionable style of dressing. Known for her designer wardrobe, she once declared, “Just because I am a Librarian, doesn’t mean I have to dress like one.” On trips to Europe her lifestyle was lavish and unprecedented. When she traveled she stayed at the best hotels—Claridge’s in London and the Ritz in Paris. It is said that she would even take along her thoroughbred horse, which she rode in Hyde Park in London. In friendships she favored affairs with rich or influential men, especially art scholars and dealers. She enjoyed a Bohemian freedom and had a long list of lovers. Asked if she was Morgan’s mistress, she is said to have replied, “We tried!” Rumor had it that she had her most lasting romantic relationship with the celebrated United States art critic, Bernard Berenson.
AN HEIRESS EMERGES
Even after J.P. Morgan died in 1913, Greene continued in her role with J. P. Morgan’s son, who bore the same name, continuing to build and overseeing the collection. Following J. P. Morgan's death she also became the director of the library. Her society and art dealer contacts made her a formidable collector and established her privileged status as the most respected librarian of the era. J.P. Morgan left her $50,000 in his will, reportedly $800,000 in modern money. Not so bad for a woman of African American decent, albeit she passed for white. Her incredible journey spanned 43 years from 1905 to 1948, the year that she retired. She died two years later in New York City.
GREENE’S NEW IDENTITY
Whispers and rumors about Greene’s passing were common throughout her life. In order to pass Greene and her mother, Genevieve Ida Fleet, who also had a light complexion, changed their name. They added “da Costa,” claiming to be part-Portuguese to account for their exotic complexion. Greene was born Belle Marion Greener (1883-1950). The family’s background was solidly-established in Washington, D.C. black bourgeoisie society. Her father Richard T. Greener, also very light-skinned, was a distinguished lawyer and public figure and the first black undergraduate to receive a degree from Harvard in 1870. Greener was also appointed dean of Howard University Law School. He separated from his family in 1890.
GREENE’S GREATEST ACHIEVEMENT
The story of Belle Marion Greener/Belle da Costa Greene reminds us, that underlying her finest achievement as J.P. Morgan’s librarian, was her talent, her shrewd intelligence, her tenacity and drive to realize her goal to make J.P. Morgan’s library the pre-eminent private collection in New York City and one of the most outstanding reference libraries for scholars worldwide.
The Morgan Library & Museum is located at 225 Madison Ave. (36th & 37th Streets) New York, NY 10016. http://www.themorgan.org/.
Posted by Polly Guerin at 11:12 AM