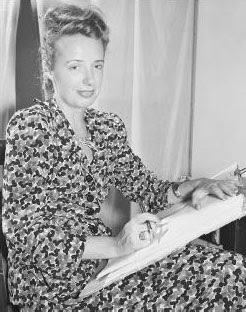 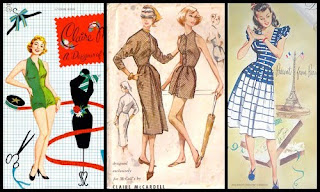 Dear Claire: Paris can still claim its title as Haute Couture fashion capital of the world but American Sportswear, the concept of mix and match coordinated pieces is duly a credited to your creative innovation. As a pre-eminent American ready-to-wear fashion designer in the 20th century you understood the new independent woman and her active lifestyle from living in suburbia and chauffeuring children to school and husbands to the train station to engaging in sports activities, the gym and cultural pursuits. McCardell was a woman of her time. She knew what women wanted and patterned many of her design ideas after her own wardrobe needs.
THE NEW CASUAL CHIC
McCardell gave new meaning to term ‘Casual Chic’. Stylish, functional, affordable and versatile the coordinated garment pieces produced the concept of “separates” that made dressing from day into night and weekends spontaneous and comfortable. Her easy-to-wear approach to fashion is synonymous with the term ‘leisurewear’ and produced a loyal following among women of the pre WWII era, who rejected the formality of the French Couture. Women owe you a debt of gratitude to McCardell’s design concepts for even today casual wear is a mainstay of the American woman’s wardrobe.
FREEING FASHION’S RESTRAINTS
McCardell freed women from wearing the structured undergarments such as corsets, crinolines and girdles underlying the corporeal restrictions and dictates from Paris in the 40s and 50s. In her book, “What Shall I Wear?,” (Simon & Schuster 1956) she wrote that McCardellisms were ‘A glossary of terms that speak to me of fashion…and haven’t very much to do with Webster.’ She referred to separates as Strip-Tease or Matches: Clothes in pieces. You can wear all of them at one time or only two or three pieces, but they all go together and are made of related fabrics.
FABRIC INNOVATION
Cultivating the cult of soft, fabric draping and gathering to accentuate the natural shape of the body McCardell fashions had vast appeal, not only for their easy-wear facility but they were relatively inexpensive. These versatile separates and dresses were produced in materials borrowed from men’s wear, lingerie and even children’s wear incorporating natural-fiber fabrics such as cotton, twill, gingham, denim and jersey. McCardell knew a woman’s need for pockets and pleats were plenty. She was the first with the “riveted look,” using work-clothes grippers for fasteners and ornamentation and snappers made it easy to snap jackets, blouses and pants on and off. When the advent of WWII brought shortages of leather McCardell put her models in fabric Capezio ballet slippers, often matching the fabric of the garment. The fad caught on and gave the ballet slipper new meaning as footwear.
VERSATILITY IS THE KEY
Tying and wrapping were one of the hallmarks of McCardell’s design oeuvre. The 1938 MONASTIC DRESS, described as any loose, shift-like dress without a waistline, to be sashed at the whim of the customer, proved a popular easy-wear fashion. McCardell wrote, “It was a full and shapeless forerunner of the pleated Grecian sheath and all the other unwaisted dresses. It seemed to have no form. But when it was belted, it did great things for the female figure.”
The POPOVER DRESS, (1942) a versatile wraparound, coverall sort of dress could be used as a house dress, a bathing suit cover-up, dressing gown or glamoured up as a party dress. These dresses were not only a favorite for active women but they also accommodated the inexact sizing and fit of ready-to-wear apparel. When it was introduced it sold for $6.95. McCardellism interpretation of the Popover, “Something that goes over everything. It is an apron one day, a bathrobe the next, a dinner dress, if necessary, with lots of beads.”
CAREER DIVERSITY
McCardell had a series of short term jobs before becoming the assistant to fashion designer Robert Turk who was head designer for Townley Frocks Inc. Opportunity came quite suddenly for the young McCardell when Turk drowned in a swimming accident and she stepped up to design the 1931 collection. She continued as designer till Townley closed is operation in 1939. Hattie Carnegie then hired McCardell to work for her famed dressmaking firm, but that affiliation did not last but one year due to Carnegie’s clients who wanted more elaborate fashions. Then onto a brief stint with Win-Sum, a low-end manufacturer until Townley reopened in 1940. With her distinct style and the importance of her design oeuvre the company soon began issuing its fashion collection under the label “Claire McCardell Clothes by Townley.” She was the first American Designer to have name recognition. By the end of the forties, Townley was Lord and Taylor’s best ready-to-wear seller. In 1944, McCardell was a highly acclaimed American designer and received numerous awards and she eventually appeared on the cover of Time magazine May 2, 1955. BECOMING A FASHION ICON
As a child, McCardell (1095-1958) lived in Frederick, Maryland, the daughter of Adrian and Eleanor McCardell and her early interest in fashion emerged serendipitously. Playful and creative she would cut figures from her mother’s fashion magazines and create paper dolls and fashion imaginary garments. It is not surprising that the spirited young girl began sewing her own clothes as a teenager. After first attending Hood College in Maryland she switched to Parsons in 1925 to pursue her interest in fashion and received her certificate in Costume Design. After years on Seventh Avenue as the recognized pioneer of American sportswear, she returned to Parsons in 1944 as a critic and instructor.
McCARDELL’S WIT
In her book McCardell wrote: "My idea of clothes is the dress that dances well, walks well, sits well; the bathing suit that you can swim in; the ski suit that’s warm; and the house dress that can receive unexpected guests. " A fascinating garment in her collection was the Diaper bathing suit, made of light cotton, with a panel that wrapped up between the legs, and was secured by thin strings. Thank you Claire McCardell we are indebted to your design ingenuity that gave us the ‘AMERICAN LOOK.’
Posted by Polly Guerin at 8:45 AM