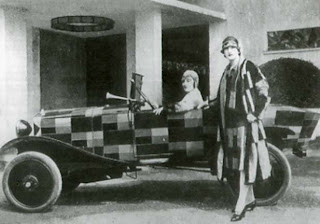 Dear Sonia: As a professor at the Fashion Institute of Technology I often spoke to my students about innovations in color and especially your remarkable ouevre as an outstanding painter and exceptional colorist. The connection between you and the German art collector, Wilhelm Uhde came about when I saw the remarkable film, Seraphine," about the French artist Seraphine Louis of Senil, a poorly educated woman who labored as a domestic in the south of France. Evolving as a
primitive painter Seraphine and Uhde, the avant-garde dealer, developed an unexpected relationship in which he promoted and sold the untrained, visionary maid's primitive art works. Wilhelm Uhde also played a major role in your life by presenting your work in his gallery in Paris and introducing you to Parisian society. You were a woman determined to succeed and married Uhde in a union that brought you to the forefront of the art world.
A Marriage of Convenience
In 1908, pressured by the demands of her influential and wealthy family Sonia needed to take steps to conform to tradition. During her first year in Paris she met and married the homosexual art collector and gallery owner Wilhelm Uhde. This union was no doubt a marriage of convenience to escape her parent's demands and at the same time for Uhde, through this public marriage to Sonia, it would 'save face' so to speak and mask his homosexuality. The marriage was an amicable arrangment and through Uhde's impressive connections and exhibitions of Sonia's art work the stage was set for her launch into the art world. Love in Paris
Love walked in one day when Robert Delaunay's aunt, a frequent visitor to the Uhde Gallery, introduced her nephew to Sonia. There was instant attraction and by April 1909 Sonia and Robert became lovers. They were two artists of kindred spirit but with Sonia's unexpected pregnancy it was decided that she and Uhde should divorce. The Delaunay's son, Charles was born the next year on January 18th.
Struggling Artists
About this time cubist works were introduced in Paris and Robert and Sonia were at the forefront of the movement. He had been studying color theories and "designsimultaneisme," which is similar to the Pointillism, as used by Georges Seurat in which primary color dots placed next to each other are "mixed" by the eye of the beholder. In 1912 Sonia began a series of non-figurative paintings called, Contrastes Simultanes, combining geometric forms with bright, prismatic hues. This work was based on the theory of the simultaneous contrast of colors of the l9th century chemist Michel Eugene Chevreul. Sonia became a leading Parisian artist of Orphism. In the Dulaunay's collaboration financial success was eminent. However, during the early period of the Delaunay's marriage they garnered a meager income and were supported by funds sent from Sonia's aunt in St. Petersburg, Russia.
The Orphism Movement
Credit goes to the Delaunay's friend, poet and critic Guillaume Apollinaire who coined the term 'Orphism,' a movement which developed out of Cubism, which made color the primary means of artistic expression. Sonia's work extended from painting to textile design, fashion, wallcoverings and stage set design. In 1924 she opened a fashion studio together with the French Haute Couture designer, Jacques Heim. Brilliantly colored and sharply patterned geometric designs were lavishly displayed in the creation of her 'simultaneous' fashions. She not only wore her Orphism influenced garments but stopped traffic in Paris when she appeared wearing a totally coordinated ensemble (cloche hat, coat and matching dress) that merged Orphism art and fashion with the interior of her automobile which was upholstered in matching textile. Sonia's art, fashion and textiles were at the height of commercial production and she exhibited her diverse collection in the 1925 Exposition Internationale des Arts Decoratifs et Industriels Modernes, which gave way later to the term "Art Deco." In 1964, she was the first living female to have a retrospective at the Louvre and later she was named an officer of the French Legion of Honor.
Early Influences
Sonia Delaunay (nee Terk 1885-1979) was sent at a young age to St. Petersburg where she lived with her mother's brother Henri Terk, a successful and affluent Jewish lawyer. Although her mother was reluctant at first to submit to the plan, Sonia was adopted by the Anna and Henri Terk in 1890. Through this privileged upbringing with the Terks she traveled widely in Europe which introduced Sonia to museums and galleries. In St. Petersburg her skill at drawing was noted by her teacher and when she was eighteen she was sent to art school in Germany, where she attended the Academy of Fine Arts. After reading a book which claimed that Paris was the center of the true art world, Sonia made one of her most decisive decisions and moved to the capital of light where her career took off through her marriage to Uhde. Sonia Delaunay-Terk died in 1979 in Paris at the age of 94 leaving a legacy of color and textile ingenuity, that has influenced countless artists who followed.
Sonia Delaunay was an extraordinary colorist, abstract painter and applied her talents and theories to all areas of visual expression. Her designs in textiles and fashion remain the epitome of modernism.
Posted by Polly Guerin at 7:27 AM