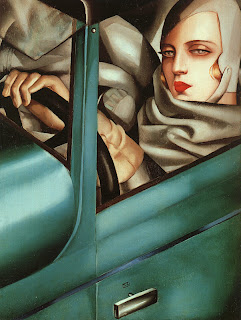 Dear Tamara: Art Deco painter extraordinaire, Russian Revolution refugee, bohemian, socialite, classic beauty, but I remember you best on the cover of the German fashion magazine, Die Dame, Auto-Portrait, Tamara in your Green Bugatti, chicly helmeted, your glove hand at the steering wheel driving forward as a free, independent woman paving the route for women of the century to follow in your footsteps. What an amazing life your carved out for yourself and despite being born into a wealthy and prominent Polish family, your steely personality was your strongest quality that fostered courage and determination to succeed in a life, which through twists and turns could have easily made you a movie star. You possessed a persona and beauty that rivaled Hollywood stars but your reputation as a famous Art Deco painter is legendary. It comes full circle today as your iconic paintings are rediscovered and sort after by new admirers.
TAMARA De LEMPICKA
A childhood of neglect did not curtail Tamara's amazing independent spirit. The core of her heritage is that of a privileged individual. Born on May 16, 1898, she was named Maria and later in life adapted the name Tamara. Her mother, the former Malvina Decler was a Polish socialite and her father Boris-Gurwik-Gorski was a Polish lawyer. As was the case in the privileged aristocracy her wealthy and prominent Polish family shunted her off to boarding school in Switzerland. However, her first exposure to the Great Masters of Italian painting came when she fortuitously spent the winter of 1911 with her grandmother in Italy. Another plum in Tamara's development was when her parents divorced in 1912 and she went to live with her wealthy Aunt Stefa in St. Petersburg, Russia.
Tamara must have been quite a beauty even then because at the age of fifteen she set her sights on marrying the man of her dreams and with her campaign to win him over, albeit abetted by her well-connected uncle, she married Tadeusz Lempicki in St. Petersburg. Rumor had it, however, that this bon vivant man, ladies man and lawyer by title only, probably was more seduced by Tamara's significant dowry.
Their privileged lifestyle came to a startling end during the Russian Revolution in 1917 when Tadeusz was arrested by the Bolsheviks. Escaping to Paris, as so many other aristocratic refugees did, the Lempickas lived for a while from the sale of her family jewels. Tadeusz, who was so used to his privileged ways, was of no help and he was either unable, but most like unwilling to find work. The burden was placed on Maria to become the breadwinner. The Lempickas' dire circumstances may have been the very catalyst that pushed Tamara into painting. Paris, the city of light and haven for artistic venues was the ideal place for Tamara's artistic development. It was also at this time that Tamara gave birth of her only child, a daughter named Kizette, who like own neglected childhood, Tamara rarely saw her daughter and sent her off to boarding school.
De Lempicka developed a technique that truly exemplified the Art Deco era. he lines had an architectural quality, sleek, clean and elegant, yet a certain curvelinear softness which was described as "soft cubism." Through her aristocratic connections she produced numerous portraits and the Lempickas' lifestyle significantly improved. During the Roaring 20's Tamara was a recognized celebrity. She knew the best of the Bohemians from Pablo Picasso to Jean Cocteau and her bisexual appetite was legendary and became the source of the gossip mongers. Tadeusz got fed up with it all and they were divorced in 1928. Perfectly timing because a long time patron, Baron Raoul Kuffner, commissioned her to paint his mistress but true to her winsome ways Tamara replaced the mistress when the portrait was finished.
Through Kuffner, who she married in 1933 (his wife had died), Tamara was re-established on the highly socially connected cognoscenti. The depression didn't seem to curtail her output and her painting continued its popular course of commissions. The Kuffner's eventually settled in Beverly Hills, California and began to socialize with the Hollywood stars of the day. She became known as 'the baroness with the brush' and cultivated a Garboesque persona, which wasn't too difficult to do, because Tamara was still a blonde haired beauty and was often compared to the legendary star.
However, her trademark style of angularity in figures of celebs and aristocrats, carved like sculpture in streamlined poses, were beginning to lose popularity. Tamara tried palette painting but this technique never took off. She retired as a professional artist in 1962 and after Baron Kuffner's death, the same year, Tamara traveled extensively, then lived with her daughter Kizette for a while in Houston, Texas and finally moved to Cuernavaca, Mexico in 1978 where she died in her sleep on March 19, 1980.
Dear Tamara, though your iconic style of painting lost favor in the 1970s, you are not forgotten, but rather adored again. Your fan's have rediscovered your oeuvre and in plays and music have paid homage to your amazing independent spirit, an Art Deco painter extraordinaire, who I will always remember racing into the future in her Green Bugatti.
Your admirer, Polly Guerin
Posted by Polly Guerin at 5:46 AM